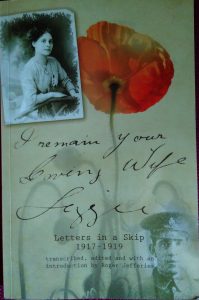 I remain your Loving Wife Lizzie, transcribed, edited and with an introduction by Roger Jefferies (London: Greenwich Exchange, 2017) ISBN: 978-1-910996-15-7 www.greenex.co.uk

The sub-title of this book, Letters in a Skip 1917-1919, sums things up neatly. Here is one of those accidental survivals from the First World War, casting a remarkable light on the experiences of ordinary people. Of the hundred or so letters found outside a house in Broadstairs, Kent, all but two were written by Lizzie Green from the Old Kent Road to her husband Tom, who served in India.

Lizzie longed for Tom’s return and thought a lot about money, health and her child. She imagined sex with Tom and wrote enthusiastically about her new false teeth. The postal system was an everyday rhythm with global reach. Life was a round of work – Lizzie was a corset maker; Tom left a job as a sewing machine agent. The war comes home in bombing raids and rising food prices, but in so many ways the letters challenge familiar stories about the conflict. Tom did not hurry off to enlist at the start of the war but was conscripted in 1916; local men died, so did women. Lizzie’s opinion of the war in April 1918 might surprise some 21st readers acclimatised in the current centenary to a history of patriotism and sacrifice. War was rotten, ‘properly murder’ and endless: ‘Why should all men suffer and wives and children be parted from one another and not only that being killed at the same time just to suit the King’s greed’. This is profoundly political as a statement of working-class indifference to and alienation from the war; the armistice mattered only because Tom would be home again (although not, it turns out, until December 1919).

In late November 1918 Lizzie was feeling more cheerful: ‘Well dear the piano is paid up the war is over and things are looking brighter dear the only thing I want now is  you home’, but by the following year her mood had slipped into post-war worry about unemployment, high prices and industrial unrest. Lizzie wrote as she spoke, so we seem to hear her voice as she responded to life around her. Listening to her, over a century later, can enrich our understanding of working-class London during the Great War. How many other letters, from other women and men, never emerged from the skip? Historians should be grateful that these ones did.

For another remarkable survival see:  The War That Wasn’t There…