As part of her research into the Home Front in St. Albans, Hertfordshire, Sue Mann has been working on the experiences of children. In this piece she comments on the ways in which children were employed and how they were an integral part of the war effort 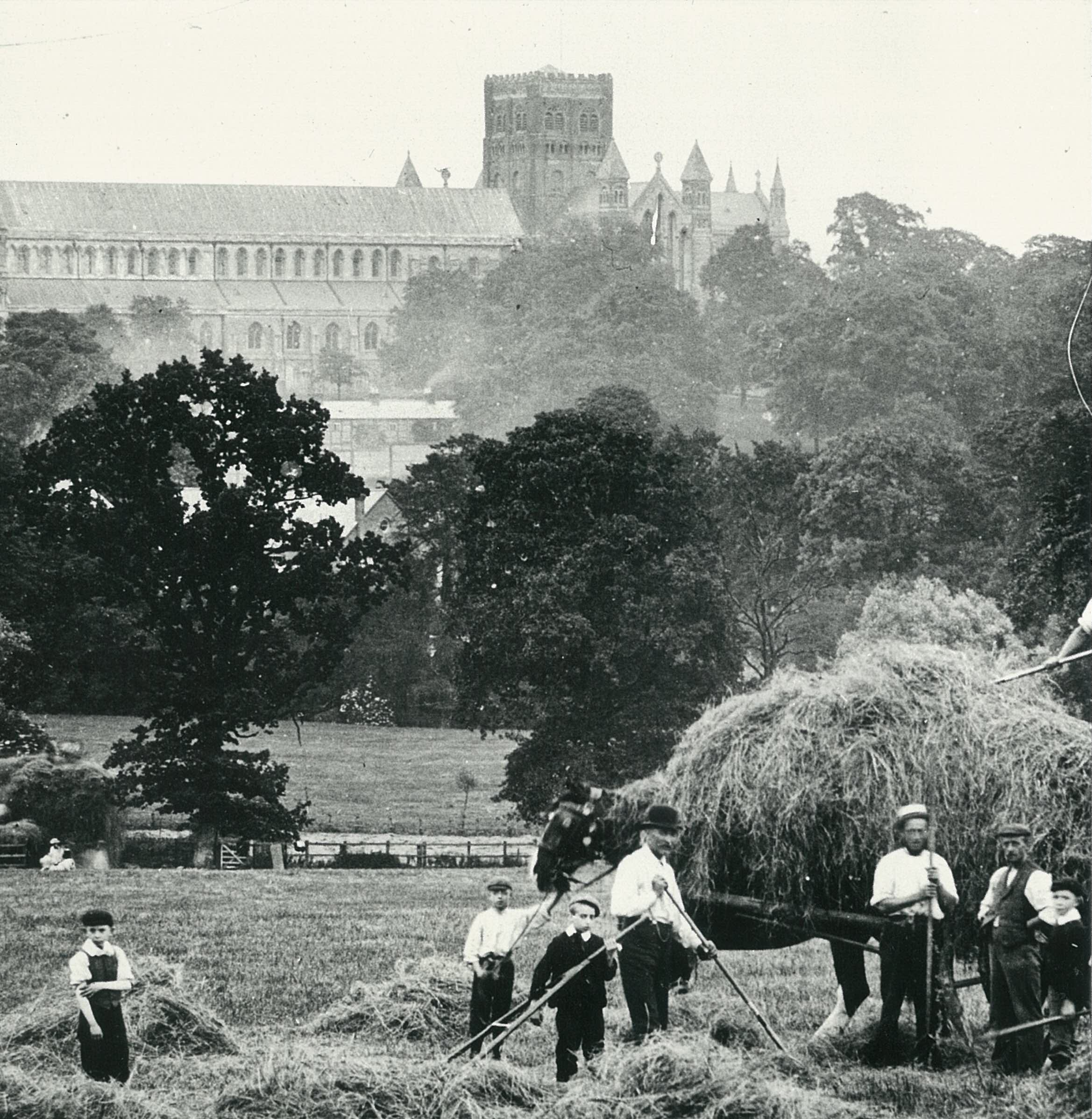 The employment of young boys to work on farms – as shown in this pre-war picture – was a convenient loophole exploited to allow boys to work in industry during the First World War.

Children in St Albans – and throughout the country – made a huge and largely unrecognised contribution on the home front in 1914-1918. They constituted a mini army, mobilised to support the war effort – at home, in the classroom, on farms and in factories.

By the government’s own estimate, some 600,000 children were put prematurely to work in this period in addition to an unknown number of ‘little mothers’ who missed school to look after siblings.[i]

Compulsory education for all children in this country was still quite a new concept in 1914.[ii]  It was introduced for 5 to 10 year-olds in 1880 and was made free to all in 1891. Until then parents were expected to contribute to the cost, if they could afford it.[iii]

The school leaving age was raised to 12 in 1899 and to 14 a year later. However, boys of 12 and 13 could be, and were, exempted from school for periods of time to work on farms.[iv] This practice provided a convenient loophole when war came.

Those who thought educating the working classes was a waste of time, lobbied for child labour to be made available not just for farm work but for other industries operating in St Albans. Educationalists meanwhile argued for keeping boys at school until the age of 14 but at the same time training them for industrial work.

Local Education Committee minutes indicate that over a quarter of boys in the 13-year age group, in St Albans, were exempted from school for periods from three to 12 months at this time.[vi] Only a handful of these boys were working on farms. Children were cheap to employ, earning half or even less than a man. In 1914, an adult agricultural labourer earned 15 shillings a week. Boys working on farms were paid 6 shillings a week or less.[vii]

In addition, those children actually attending school full-time were regularly employed to work before and after the school day. It seems that there was little control over this until byelaws were introduced in St Albans in late 1917.[viii]

One wonders how many hours children worked and at what age as the new byelaws prohibited the employment of children under 10 and restricted the number of hours they could be employed to four and a half hours a day in winter and five and a half in summer.

It appears that few girls were exempted from school, tending to leave the moment they turned 14. And there were expanding work opportunities for them in this period, including at E. Day & Co’s hat factory in Marlborough Road. Days had set up a production line employing mainly women and girls to turn out military sun helmets.[ix]

Included in this workforce was Dora Merkins of Etna Road. She left school on her 14th birthday in February 1916 and started work the very next day at the hat factory where her father was employed as a stores manager. She recalled making ‘big helmets for abroad.  We used to stitch all the bits together… I got into trouble several times ‘cos I made a mistake.’[x]

In researching the everyday lives of people living in St Albans during the First World War for the book St Albans: Life on the Home Front, 1914-1918, it was striking how ‘normalised’ it was to expose children to the realities of war. For example, children from the elementary schools were routinely making medical equipment for the Red Cross, including crutches and splints. A reporter from the Herts Advertiser, visiting the technical institute in Victoria Street where local children were busy turning out such items, commented that such war work would ‘bring the children into closer touch with the conditions that are prevailing in the country now’.[xi]

Recent books on this subject include: Children in the First World War by Mike Brown and The Children’s War, Britain 1914-1918 by Rosie Kennedy.

Sue Mann is co-editor of St Albans: Life on the Home Front, 1914-1918, published by Hertfordshire Publications (2016), and a member of the St Albans and Hertfordshire Architectural and Archaeological Society.

[i] G. DeGroot, Blighty: British Society in the Era of the Great War (London, 1996), p220, which is quoted in The Children’s War: Britain, 1914-1918. Accessed 22 September 2017. An example of a little mother: Herts Advertiser (HA), May 1918, Petty Sessions, James Matthews summonsed for not sending eldest daughter, 13, to school regularly. He said she was needed at home as her mother had to go out to work and couldn’t find the money for food and boots to send her regularly.