Ever wondered what happens to the odds and ends lying around even in an electronic age – lists of things to do, receipts or notes – and what someone in the future might make of them? 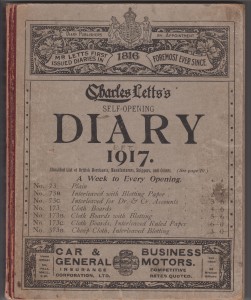 This is a story about an everyday item that turns out to be a powerful insight into lives led during the First World War. It begins in 2012 when I paid a dealer £20 for a bag of assorted letters and other documents dating from the late 19th century and early 20th century. This was history by lucky dip: one of the items was a hand written diary from 1917. All but one week in August had been filled in neatly as had the pages for notes and accounts. I read it quickly and my first impression was that it never mentioned war. Compared with the letters and diaries kept at the Imperial War Museum, for example, it seemed a very poor source and of little historical value. I’d put it back in the bag and leave it until I got around to tidying odds and ends.

But something about the diary’s apparent silence intrigued me. The First or ‘Great’ War was supposed to be a ‘total’ war in which the whole of society and all its resources were mobilized. As a result, it was virtually impossible for anyone in the United Kingdom to be untouched by its effects. If that was the case, where did the diary fit and who was the diarist? What was going on?

So instead of putting the diary back into the bag I started to read it again, more carefully this time. The second time around I did pick up some references to the war: a man joined up (6 Feb), another received his papers (22 March), a third was rejected (27 Sept); Alf Rickman died of wounds (28 Feb); the public clocks, which had been silenced for fear of Zeppelins, struck again on 14 March. In April, three soldiers from the Worcester Regiment were billeted on the diarist’s family. A battle plane flew over in August. In November the Co-op was fined for selling split peas above the control price.

Together these didn’t add up to much; more significant was the following entry from March when ‘Charlie was transferred from Wakefield to Dartmoor’. These sounded like prisons so with the introduction of compulsory military service in 1916, was Charlie a conscientious objector? By now I was hooked. It was time to turn to other historical tools to help.

The diarist had written what was presumably his name – E F Taylor – on a page of advertisements at the front of the diary, and on 8 May noted his 16th birthday. Most recreation took place in ‘town’ but he cycled out to Coate, which is near Swindon. So with a partial name, date of birth and approximate place, first stop was the 1911 census. And there he was, Edward Fred Taylor, aged 9, at 19 St Margaret’s Road, Swindon. In the household were the 2 brothers and 2 sisters mentioned in the diary, confirming the match. In 1911 his father and elder brothers were employed at the two places where Edward, as we now can call him, worked in 1917:  the Cooperative and the Railway Company’s carriage works.

With a full name, I moved on to school logbooks and registers, again online. I traced Edward to Lethbridge Road school and then on to Higher Elementary school in 1913: I now knew that when the diary began in 1917, he had been less than a year out of school. And what about the tantalising hints about Edward’s brother Charlie? A standard search through the military sections of the genealogical databases turned up a ‘Record of Service Paper’ from Woolwich in 1916, but more significantly, he appears in Cyril Pearce’s database of conscientious objectors. And now the diary revealed something the other sources hadn’t: that Charlie was a member of the Independent Labour Party since he was at a meeting when the constables came around to arrest him in November 1917. A further connection emerged from the apparent trivia of Edward’s notes: a Christmas present from Jim Innes linked the family to another CO. 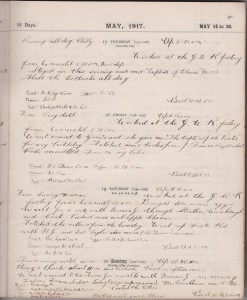 So what do we have now? A glimpse of 1917 through the eyes of a 16-year old boy who is already working 11 hours a day but thoroughly absorbed by teenage pursuits: his stamp collection, buying a camera, football and going around town with his mate, Norman G. If the reading list is anything to go by, Edward’s imagination was caught up with stirring tales of global adventure, a tone set by his first novel of the year, The Prisoner of Zenda. His family’s political loyalties come through in a reference from May to a ‘Labour demonstration’, but the rhythm of the diary is set by personal and domestic details: toothache, night school, cycle rides and meals.

Diaries record patterns of life and thought; in our zeal for evidence of war we can overlook the material that does not fit our preconceptions. Centenaries are about remembering, but they are also about forgetting the pulse of everyday life: gadding about with Norman G or picking bluebells. In Taylor’s diary, war is on the periphery, coming home literally in the form of Charlie Taylor and the billeted soldier who occupied Edward’s bed leaving him to sleep downstairs, but most of the time pushed out to the edge. Reconstructing the life of Edward Taylor reminds us of this, inviting us to see official histories of war as only partial stories of human experience. In thinking about the legacies of war, what first appeared to be the inadequacies of Edward Taylor’s diary became their most remarkable characteristic.

In reconstructing Edward Taylor’s life, the following sources were used:

1911 Census: via Ancestry.com and Findmypast.co.uk

Pearce database of Conscientious Objectors: available via the Imperial War Museum’s LivesoftheFirstWorldWar.org (from May 2015)

Letters in a Skip