Dr Julia Neville is an Honorary Fellow in the History Department at Exeter University, and serves on the Council of the Devon History Society.

In 1917, as food shortages started to make an impact on Britain, there was a move to set up ‘communal kitchens’ where catering for large numbers would mean economies of scale, minimal waste, and more effective use of fuel.

These schemes were not successful everywhere. In Cullompton, a market town in East Devon, the recently formed Women’s Institute opened their communal kitchen on 10 May 1917 in the Victoria Hall. They sold 150 meals ‘in a few minutes’ on their first day and by January 1918 the Kitchen was self-supporting, opening twice a week for meals and once for soup, and had notched up sales of over 3000 dinners. When the Western Times visited in February 1918 the meal consisted of ‘an excellent plate of meat soup with vegetables and potatoes’, followed by a treacle pudding, all for 3d. 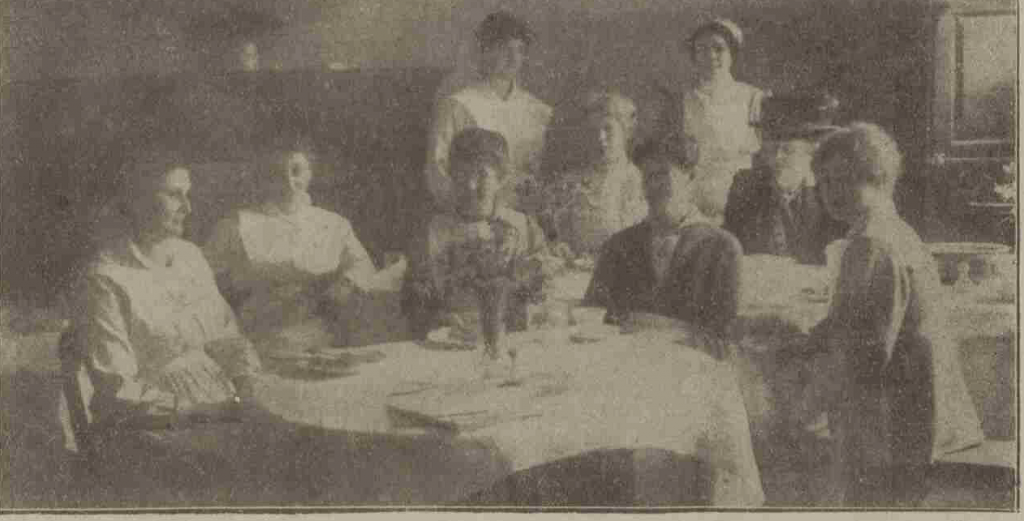 In Exeter, on the other hand, a communal kitchen set up in the Exe Island Mission Hall was a failure. Advice had been taken from local women familiar with institutional catering. Menus such as ‘Savoury soup and baked jam roly-poly’, or ‘Baked Hot-pot and Milk Pudding’ cost no more than 2d. But though more than 100 dinners were sold daily in the first week, within six months the kitchen had closed. Perhaps the venue was too tainted with associations of charity to find widespread acceptance. Exe Island was in the heart of slumland, and the cooking utensils used were borrowed from the Exeter Penny Dinner Society. One woman, asked whether she had been there yet, replied, ‘No, I haven’t come to that yet. It would be a disgrace if I were seen there.’

In 1918 Lord Rhondda, the Food Minister, promised to ‘ginger up’ the idea of communal kitchens. The National Kitchen scheme was launched on 5th February and the first official National Kitchen was opened by Queen Mary in May. Local authorities, tempted by the offer of a 25% grant from the Government towards equipment costs, began to consider setting one up in their community. But very few of the schemes materialised. The voluntary-run schemes in Barnstaple, Cullompton and Torquay schemes, but in Paignton the Food Control Committee felt that ‘the time [for a national kitchen] has not nearly arrived yet’; in Teignmouth the Council felt that ‘[t]he cost would be out of all proportion to the benefits’; and the scheme was also turned down in Crediton, Ilfracombe, Exmouth, Dartmouth, Torrington, Newton Abbot and Axminster. Only in Woolacombe and the St Marychurch district of Torquay was there any enthusiasm. These were both holiday resort areas, and the Woolacombe application specifically mentioned that the object was ‘to provide for the reasonable needs of all during the holiday season, when a large rush of visitors was expected.’

The debate over setting up a National Kitchen most widely reported was that in Exeter City Council. A sub-committee had been to the successful National Kitchen in Taunton, and proposed that one should be set up in Exeter, thinking it would be particularly useful for city workers. But opponents were ready with examples of the earlier failure on Exe Island, of losses made on the National Kitchens in Croydon, Liverpool and Manchester. They were hostile to municipal trading in principle and concerned about taking away the livelihood of small butchers, bakers, greengrocers, as well as of restaurant and café owners. It was even claimed that the success of the allotment movement showed that people would prefer to grow their own food. The report was adjourned, and never heard of again.

While the communal kitchen movement may have been successful in some parts of the country, perhaps particularly where there were factories, there was little pressure for setting them up in Devon. Even the fact that the National Kitchens Regional Adviser for the South West, Miss Ruth Whitaker, was a Devonian, did not lead to success. Local organisations remained confident that they could manage well without them. It was only where there was a committed local organisation, or the additional challenge of the tourist trade, that Communal Kitchens were successfully established in Devon.