An Irishwoman in England

The reaction to men joining the army or refusing the call to volunteer was intrinsically different in Britain and Ireland. While generally based on opposing ideals, there should be little connection between such anti-war movements. However, one key player in the anti-war movement managed to forge connections between activists in Ireland and England; the Irish poet and political activist Eva Gore-Booth. From the onset of war, Gore-Booth initiated a targeted campaign for peace. Ignoring any legal threat, she gave her first anti-war speech in London in December 1914. Her talk entitled Whence Come Wars? condemned the premise that men were fighting to protect their women and children at home. 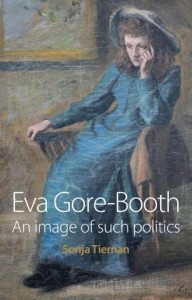 Shortly after the sinking of the Lusitania, Gore-Booth attended a conference on the ‘Pacifist Philosophy of Life’ at Caxton Hall in London. She presented a paper entitled ‘Religious Aspects of Non-resistance,’ questioning how to resist the ‘appalling calamity of present cruelty and destructiveness of war.’ Gore-Booth impressed two noteworthy delegates, Bertrand Russell and Fenner Brockway, central players in the British anti-conscription movement. Brockway founded the No Conscription Fellowship. The organisation offered support for men who refused to take up arms on moral, religious or political grounds. Initially female membership of the Fellowship was mainly confined to those related to conscientious objectors.

The Great War had now been raging for just one year and already it had claimed an enormous loss of life. Various Bills went through the House of Commons from November 1915 and a proposed conscription bill did not exclude the possibility of the death penalty for men who did not comply. Gore-Booth wrote to the Manchester Guardian on 20 January 1916 testifying: ‘May I point out that, as the bill now stands, if a man fails to convince a committee nominated by the local authority not only that he is a bona fide conscientious objector, but also that a conscientious objector ought to be exempted, he may pay with his life for the private militarist views of members of his district council.’ Conscription came into effect in Britain in March 1916 and the process for gaining an exemption on conscientious grounds would prove to be particularly challenging.

The high level of arrests depleted the male membership of the No Conscription Fellowship. Women began to play an increasingly important role until finally taking over operations. Catherine Marshall was appointed as Secretary when her then partner, Clifford Allen, was imprisoned. The women oversaw a highly organised press department to expose the injustice and brutality of how Conscientious Objectors were treated. They produced a weekly newspaper, The Tribunal, from March 1916 which included details of military tribunals. Authorities regularly raided their offices and dismantled the printing presses. The editor of the Tribunal, Joan Beauchamp, was arrested in one such raid. The General Secretary, Violet Tillard, was sentenced to 61 days in prison for refusing to divulge the whereabouts of the printing equipment. Edith Smith was sentenced to six months in prison for printing an anti-conscription leaflet.

Undeterred by criminal prosecutions, Gore-Booth dramatized a day in her role as a ‘watcher’ at military tribunals. Describing a day spent in an ‘ugly airless room . . . haunted with memories of vain appeals and helpless protest.’ Her account provides a rare glimpse into the oppressive process involved in seeking an exemption from war service. The pamphlet was a blatant condemnation of the government’s war policy. It is not clear how Gore-Booth escaped arrest for her publications. As an Irish woman connected with the nationalist movement, she was at risk of receiving a more severe sentence than her female colleagues. Significantly this pamphlet was published only months after the Easter Rising in Dublin. 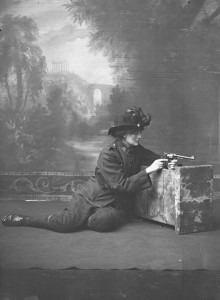 Countess Markievicz (Source: National Library of Ireland on The Commons)

Gore-Booth’s sister, Countess Markievicz, was a member of the Irish Citizen Army and took up arms, acting as second in command of a battalion, during the Irish rebellion. The British public were horrified that Irish people would plan a rebellion at a time when tens of thousands of British soldiers were being killed at the front. In the midst of campaigns for Irish independence the recruitment of Irish men into the British army was a contentious issue. The Military Service Act 1916 excluded Ireland. Over 200,000 Irishmen voluntarily joined the British army during World War One. In March 1918, the Irish Convention established to resolve the Irish Home Rule issue, recommended the enactment of the Bill under condition that conscription be extended to Ireland. On 16 April 1918 the extension of the Military Service Bill, enforcing conscription in Ireland, was announced.

The Irish Anti-Conscription Committee was formed; they produced a pledge resisting conscription. The pledge was taken at the door of every church around the country on 21 April. A generals workers’ strike took place on 23 April. Again women would prove to be the main instigators behind the anti-conscription movement. The suffragette organisation, the Irish Women’s Franchise League, examined the situation in England. Enforced military service there meant that women had to take the place of male workers. Women across Ireland pledged that, if conscription was enforced, they would not fill the jobs of men.

Gore-Booth launched a propaganda attack at the heart of the British war effort. She opened a debate in the pages of British newspapers. ‘The ruin preparing in Ireland,’ was published in the Manchester Guardian testifying that in Dublin ‘a resistance to the death is being undertaken in a spirit of passionate revolt and religious faith which may turn Ireland into a nation of rebels and martyrs, but never into an army of conscripts.’ Days later a man from Surrey replied to the paper exclaiming how ‘the striking letter of Miss Gore-Booth . . . compels all thoughtful men and women to pause. We English people want above all things to win the war, and we ask ourselves whether the conscription of Ireland against her will is not the way to lose it. We may deplore Ireland’s action, but we cannot ignore it.’ Despite British efforts, forced conscription of Irish men into the British army was never legally introduced.