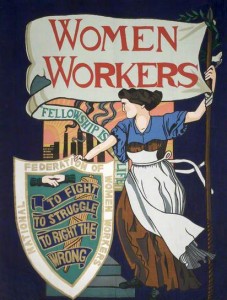 On Saturday 21st March, 2015, a conference organised by the Midlands Region of the Women’s History Network, The University of Worcester and the Voices of War and Peace: the Great War and its Legacy Community Engagement Centre, brought together a number of researchers  to explore how women from a variety of backgrounds experienced the First World War.

Much of the narrative surrounding women and the First World War has stressed the story of the war as an opportunity for women to enter the public sphere in ways previously denied them. However, far from being inexperienced, several papers demonstrated that women had indeed been organising to support other women for many years, within such organisations as the Women’s Co-operative Guild,  Trades Unions and charitable organisations; the war saw them bring that experience to bear in supporting those in munitions’ factories, working in agriculture, or coping with domestic hardship. In this centenary year of the establishment of the Women’s Institute, new research is revealing just how much the Home Front drew on women’s skills of organisation.

To read more of the range of topics covered, see a blog from one of those who attended the conference.