In my last post about the Enniskillen workshop I recounted the varying views on the act of remembering. In today’s post, I want to spend some time thinking about the participants’ attitude towards a symbol of commemoration.

The wearing of the poppy is the one theme that has been constant throughout all of the workshops. And, like those before Enniskillen, there were varying views last Friday.

If you read this post about the workshop in London, you’ll know that those present started off in agreement that they would wear the poppy. But, as the evening wore on, it became apparent that doing so was far more complex than their initial quick response suggested. Participants came to qualify their original assertion by explaining that they would wear it only in certain places (often not ‘at home’ in Ireland) and after certain times (post-Good Friday Agreement in England).

Location came up again at this workshop. We heard from a woman who had spent her childhood in Canada where the poppy does not carry the same political connotations as it does in Ireland. She hasn’t worn the poppy since her return to Northern Ireland, something that she resents in her adulthood. The problematisation of the poppy, she felt, prevents her from repeating her childhood routine.

Naturally, as we were in Northern Ireland, the question of communities came into the conversation. For families that contained both the nationalist and unionist tradition, the poppy had both challenges and benefits. We heard from a participant who came from one such family. That person’s grandfather was a nationalist, but he wore a poppy ‘with pride’ out of respect to the other element of his family. Though often seen as a divisive symbol, the poppy clearly has potential, as the next story also shows. 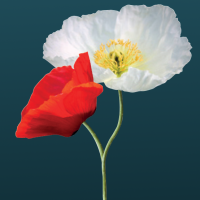 The white poppy – which, intertwined with the red poppy, has been a feature of our Centre’s logo from the start – was discussed in more depth at this workshop. One man explained how passivism was his family’s politics. His relatives had been conscientious objectors during the war, and the stigma of that stayed with the family long after. The blame, as he put it, was passed through the generations, although his family didn’t actually speak about it. He learned of this element of his history from others and was bullied in school for it. He was careful not to talk about it. But in his mid-20s he began to wear the white poppy and discovered a catharsis in talking about its meaning for him. Though acknowledging that there are challenges to wearing, he wants people to stop him and ask why he wears it.

So often, the narrative, for the nationalist community, at least, is that that the poppy is problematic. Granted, this man was talking about the white, not red, poppy, but it’s still been really fascinating to hear a poppy talked about as a sort of healing instrument, and, in the case of the previous contributor, as a tool for cross-community support. Attitudes towards the poppy are, of course, highly individualistic and complex, as the workshops are confirming, but these stories are an important element of the narrative that often gets overlooked.