Since my last posts (post 1, post 2 and post 3) about making a replica of the artillery shell basket (90/43) at the Museum of English Rural Life (MERL), a number of interesting threads have surfaced. The first was an unexpected find by basketmaker, Nadine Anderson, at a steam rally in her local area. She happened upon a basket for sale on a stall, being sold as a carriage whip holder. It was in fact a shell basket, of a comparable design to the basket I have been studying from the MERL collection. 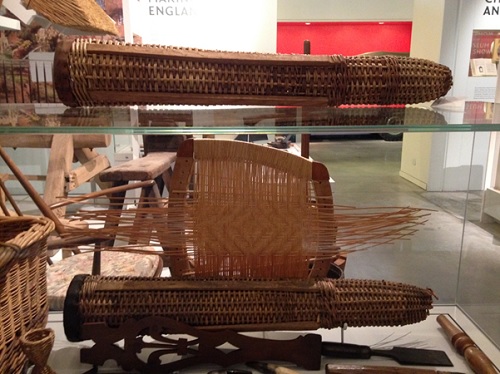 The photo above shows Nadine’s basket on top of a display cabinet at the MERL containing the shell basket in their collection. © The Museum of English Rural Life, University of Reading.

Nadine’s basket appears to be the same length and diameter as the MERL shell basket, with four wooden splints. It is divided into sections of different weaves and materials. Some parts are identical; with others are worked in an alternative material or with a substitute weave. It has a leather cuff, missing the buckles, with a very interesting stamp on the leather. Nadine’s basket uses paired cane to weave around the wooden splints at the wide end, unlike the MERL basket which has a band of woven willow.

At a recent Basketry Then and Now event, which took place at Coates English Willow, basketmaker Jonathan Coate made an impromptu copy of Nadine’s basket, working from the original and substituting suitable material he had at hand. At the time of the First World War, Coates grew willow but had not yet started making baskets – but they do have records showing they supplied willow specifically for making shell baskets. 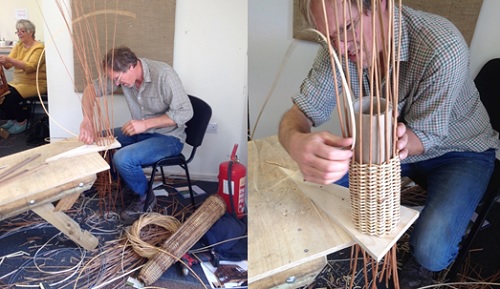 Working around a cardboard tube as a former, and using willow stakes and cleaved Kooboo cane, Jonathan worked from the wide end to the narrow end adding in the splints as he went. He used a piece of wood with holes drilled in to take the stakes, and which he attached to his lapboard with a pin so that he could pivot it from side to side and work up the tube. Finally he inverted the basket to complete the border at the wide end.

At the beginning of October, Maggie Cooper and I visited Leicester to view the Dryad Collection held by Leicester Arts and Museums. What an interesting visit it turned out to be. We had asked to look at two shell baskets, as well as items from Dryad, including Charles Crampton’s miniature baskets and samples of materials from the Dryad Cane Works. 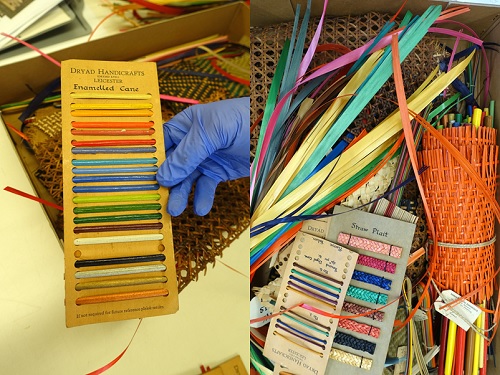 Examples of enamelled cane from the Dryad Collection. By permission of Leicester Arts and Museums.

The two shell baskets in their collection matched the designs found in the Dryad catalogues under ‘new pattern’ and ‘old pattern’ shell baskets. However neither matched the length of the MERL’s or Nadine’s basket. 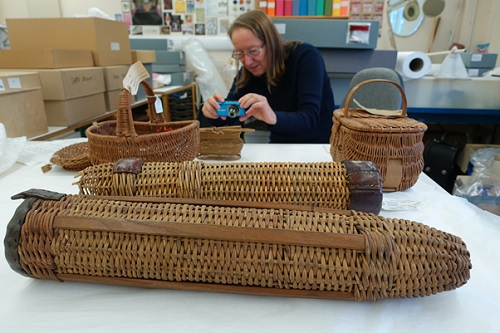 By permission of Leicester Arts and Museums. The back basket shows the ‘old pattern’ and the front basket the ‘new pattern’.

Both the old and new pattern baskets shared some common features with both the MERL’s and Nadine’s basket, but there were some variations in the use of materials and weaves. Although it is considered likely that both baskets were from the Dryad Works and made during the First World War, I was seeking confirmation of this link. Fiona, the Collections Officer supporting our visit, looked back at the paperwork associated with the accession of both items into the collection. It was then that we discovered a missing part from the new pattern basket.

Accompanying the shell basket was part of its missing buckle and attached to it, a Dryad ‘sample’ label with reference to the War Office 1915 and the title ’18 pounder shell basket’. This was most satisfying as it made a connection with the Dryad Works Committee Minute Book, and in particular with the huge numbers of shell baskets ordered during 1915, including work for the War Office. 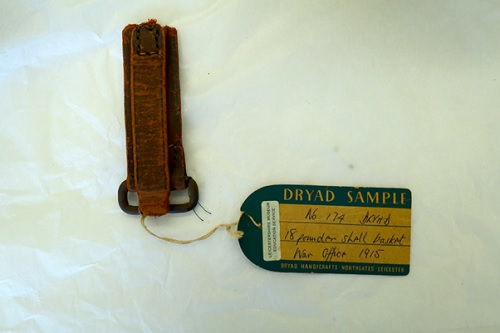 The leather buckle. By kind permission of Leicester Arts and Museums.

So, although there is clear evidence that one of the baskets in the Leicester Arts and Museum collection was made by Dryad, it raises the question as to whether either the MERL’s basket or Nadine’s were also made by Dryad. Given the differences in the materials and methods used in making, it seems unlikely.

With thousands of shell baskets being made to support the War effort, we will probably never know where they were all made. It is also not clear whether the fact that Coates supplied willow for shell baskets means that they were sometimes made of willow instead of cane, or if this simply referred to the woven willow bands found in some shell baskets, like the one at the MERL. However, on my journey to recreate a shell basket for myself I can only reflect on the skill and versatility of the makers, most likely working under pressure, with any suitable materials available to them at the time.