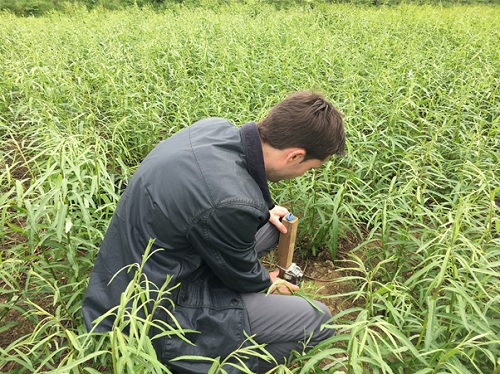 My filming adventure with the Basketry Then and Now project began in June 2016 with what started as a one-off trip to The Museum of English Rural Life in Reading. However, this was soon followed by two more trips – to the Imperial War Museum, Duxford and to a workshop in Sussex. This was to become the project’s first film, War and Remembrance, exploring ideas of memory and loss. The subject of the film was Mary Crabb, a basketmaker who had been undertaking her own unique project to make a replica of a First World War artillery shell basket. The purpose of recreating this specific piece was to connect with and remember a young man called Cecil, her grandmother’s boyfriend, who was killed during the war, aged just 18. It was a moving subject line and one that revealed the uniqueness of the entire project to me. (Watch the film here).

I was then asked if I would make a further four films for the project, each focussing on a different aspect of the research. For the next film in our series I visited Rothamsted Research in Harpenden, Hertfordshire where I filmed a walking tour of the National Willow Collection, led by William Macalpine. The collection, which was founded in 1923 is huge, with over 100 varieties of willow. The tour enabled me to see the wide-ranging properties of the different varieties and how they are used by basketmakers. This led to the idea of installing a time-lapse camera in one of the fields. I wanted to capture the growth of the willow from its cut-back winter dormancy to full spring growth. (Watch the film here).

I used a specific time-lapse camera with a weather-proof housing which can be left for weeks at a time. I programmed it to take one photo every minute between the hours of 7am and 9pm, between March and May. All I had to do was check it periodically to ensure it hadn’t fallen over and that the batteries still had power. The results have been fascinating to watch – and it was great to get out into the field.

The project has taken me across the UK. For the next film, I travelled to Inverness, where I spent a day filming Tim Palmer making a replica of a First World War Sopwith Camel basketwork aeroplane seat. The seat was then sent to Tony Dyer in Wiltshire who added leather padding and the finishing touches and then installed it in Sopwith Camel cockpit he’s built – and I filmed Tony talking about his passion for making replica aircraft. 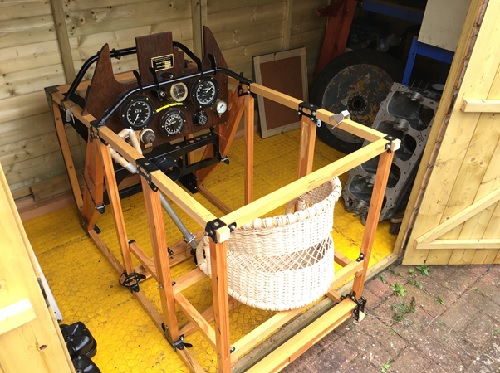 For the final part of this film I interviewed Bunty Ball, a basketmaker from Suffolk. We met at Martlesham Heath Control Tower, a former Second World War air base, now a museum. Bunty has done extensive research into the use of willow in the First World War, in particular for balloon baskets and aircraft seats. Bunty provided the detailed context for this film and explained why basketwork was ideal for use in aircraft at the time.

The next stop was the village of Castle Donington in Leicestershire. The Trent Valley was one of the main centres of willow growing and basketmaking until the First World War. We filmed local basketmaker Maggie Cooper, who gave us a guided walking tour of key locations in the village’s basketmaking history – although very few of the locations have any physical traces to tell us what they once were. We also filmed Maggie making a typical Castle Donington-style basket in the local museum.

The final film looks at the therapeutic aspects of basketmaking and craft. I visited the former military hospital at Seale Hayne in Devon, where I filmed Raymond Bartlett describing the pioneering work done there in the treatment of the worst cases of shell shock, and how basketmaking was a part of this. I then made another trip to Scotland, to Aberdeen this time, to meet with Stephanie Bunn, Tim Palmer and Irene Patterson to film an ‘in conversation’ about the changing role of basketmaking in occupational therapy.

Through making the films, I’ve met so many fascinating people and have learnt so much. I’ve found the whole project to be really insightful and very rewarding, shedding light on an industry that I knew nothing about.