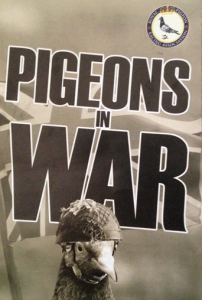 Last month I visited the Royal Pigeon Racing Association’s Pigeons at War exhibition at Bletchley Park and met with Colin Hill from the RPRA to find out more about First World War pigeon baskets and their manufacturers. While the exhibition mainly focuses on the role of pigeons and their daring exploits during the Second World War, there is one case dedicated to the pigeons of the First World War.

Carrier pigeons were a vital form of communication during the First World War when wireless and telephone communication was often unreliable or unavailable – in the trenches, in tanks, in aeroplanes, and on boats. A huge number of containers was required for transporting the pigeons, and baskets were an obvious choice – although wood, metal and textile crates were also used. These baskets seem to have come in a wide range of shapes and sizes, and so I took along copies of FWW photos depicting pigeon baskets, and pestered Colin with endless questions about what each one was used for and how many birds it would take.

Colin felt that many of the baskets were of a fairly standard design – often based on those used by the racing pigeon fraternity before the war – although the particulars varied. So far, I’ve only found information about the large, flat, pannier-type baskets (see Q 18617 at the Imperial War Museum) – three are listed in The London Union of Journeymen Basket Makers: Trade List of 1916 and there is an advert for a E. Loxley’s ‘indestructible pannier’ in the 1916 Racing Pigeon Annual. 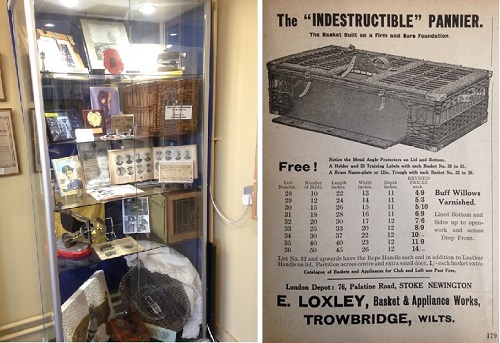 Left: First World War case in the Pigeons in War Exhibition.
Right: Advert in the 1916 Racing Pigeon Annual for an ‘Indestructible pannier’ made by E. Loxley, the largest of which (45 x 26 x 12 inches) could take fifty birds!

The exhibition included an original FWW pigeon basket designed to take two birds, and of the type used in the trenches. It had a door at either end, and a divider placed diagonally across the basket which could be removed if transporting only one bird. It had a wooden base and was lined with canvas, and had a leather handle on the top. I’ve managed to identify similar baskets in photos from the period – some with leather handles and some with wicker handles. Colin explained that the baskets often had a canvas pouch fixed to the side for a message book and pencils. 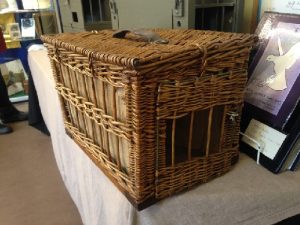 Basket for two pigeons used by the Royal Engineers, on display at the Pigeons in War exhibition.

Pigeons were often transported to the front line in baskets worn on the backs of motorcycle riders (see Q 8879 at the Imperial War Museum). According to Colin, this was extremely dangerous as the riders were often targets for enemy snipers. These were often quite large, double-tiered baskets, and might take as many as ten pigeons per tier. Given that a pigeon weighs approximately 1lb, these baskets would have been quite heavy.

I showed Colin a picture of a collapsible pigeon basket with openwork sides and a net floor and lid that I’d seen on a visit to the stores of the Imperial War Museum, Duxford (see COM 59). They could take at least 10 birds, but would only be used for short journeys, such as to take pigeons back to the lofts. These baskets were still being made by Shepherd’s of Leicester in the 1960s.

I’d also come across some pictures of pigeons held in slings inside a basket (see Q 55233 at the Imperial War Museum). According to Colin, these baskets were never used by the British. The purpose of the slings was to prevent damage to the feathers – as the birds don’t fly as well if their primary or secondary feathers are damaged.

It really was a fascinating day out and I’d strongly recommend a visit to the exhibition. The feats of the pigeons and the ways in which they were used in both world wars are incredible – and sometimes barely even credible they seem so unlikely! And I’d like to say an enormous thank you to Colin for taking the time to answer my questions and share his extensive knowledge with me.

And don’t forget that we are running a course to reproduce a FWW pigeon-basket at the Willow and Wetlands Visitor Centre, Somerset on 22-23 September 2017 (details here), accompanied by an exhibition, talk and film screenings on 23 September (details here)

There are some excellent resources available on the history of pigeons in war: