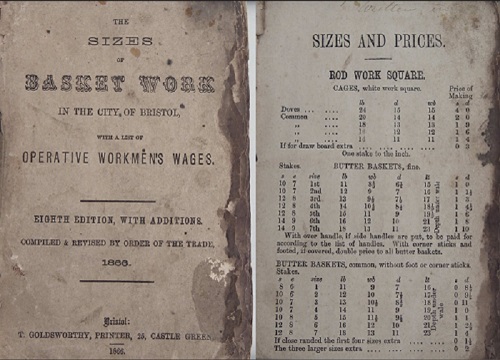 The Sizes of Basket Work in the City of Bristol, with a List of Operative Workmen’s Wage, 1866. Image courtesy of the Coate Family, Stoke St. Gregory.

I do not know their origins, but since at least 1850 various basketmaking associations, such as the Journeymen Skip, Basket, and Hamper Making Society, the London Union of Journeymen Basket makers, and the British Amalgamated Union of Journeymen Basket, Cane and Wicker Furniture Makers, have been producing Basketmakers’ Lists of Sizes and Prices. These lists give details of the size, number of stakes, type of weaves and rate of pay for each basket described.

The Museum of English Rural Life (MERL) at the University of Reading holds the largest selection of these sizes and prices lists that I’m aware of, spanning nearly 100 years from 1850 to 1943. Many of these lists are regional, but MERL happens to have a national list from 1916 – particularly relevant to Basketry Then and Now – and I recently had the opportunity to look through them all.

It seems that the aim of these lists was to ensure fair pay and working conditions for the basketmakers. The 1873 list, a revision to an earlier list, states in its introduction that ‘our present List has become inadequate to obtain that amount of wages, which is now needed to purchase the necessaries of life.’ According to the 1916 list, a basketmaker had to work 52.5 hours a week at a rate of eight pence an hour, and give a week’s notice should he wish to leave. Every employer was entitled to one apprentice for every five men (compared with one apprentice for every three men in 1873). The lists often also include instructions on how the measurements are taken, how handles and fittings are costed, details of particular weaves etc.

I was obviously particularly interested in the 1916 list. Baskets were used in every aspect of life for storage and transport – in agriculture, industry, fishing and the home – but in 1916 they were also used for military purposes – cases for artillery shells, baskets for carrier pigeons, aeroplane seats, observational balloon baskets, and invalid chairs and spinal carriages for the wounded.

I had been hoping that the 1916 list would shed some light on the huge variety of carrier pigeon baskets I’ve seen in photographs – almost every basket seems to be different – but no such luck. The lists give no information about what the baskets were used for, or diagrams or photos of what they looked like – just a name (and this goes for all the baskets listed). There are some fascinating baskets in there though, the purpose of which, to me at least, is unknown – ‘tod skeps’, ‘betwells’ and ‘doffs’ for example. It’s also incredible to see the vast array of baskets for very specific purposes, showing just how important a role baskets played in everyday life at the time.

The lists provide a wonderful record of all the standard baskets in production at any one time. One of the things I’d really like to do (if I ever have time), is to transcribe the lists of baskets recorded in each to enable future researchers to look at how the demand for baskets changed over time.

Lists of Sizes and Prices held at MERL

A reprint of the 1956: The National List of Basic Wage Rates in the Basketry Industry is available from the Basketmakers’ Association.