I ended my previous post about the recreation of a World War One artillery shell basket seen at the Museum of English Rural Life (MERL 90/43) with a question about how to process the cane I needed to weave the basket. Having spent time preparing some kooboo cane for a trial, it quite quickly became apparent that I would need to refine the processing of the cane I was working with.

I spent some time researching types of cane, so that I could better understand it as a material. Discussions with the supplier and with a number of basketmakers led to me to try splitting the cane by hand with the use of a knife, and round the edges so that it would be less likely to cause injury to my hands whilst weaving. To reduce the risk further I decided to wear gloves whilst processing, which proved to be prudent. 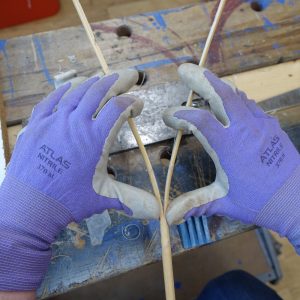 Splitting the cane by hand was a very satisfying process. As the cane split along its length it made a delicious cracking sound. The split had to be controlled as it can easily move off centre, this was done by putting pressure on the sides of the rod to direct the split. Once split, the edges had to be shaved. In basketmaking terms this could be done with a small adjustable tool called an upright, but this shaves the vertical edges to give the rod an even width. Whilst an even width was important, my main reason for shaving the edges was to round them. 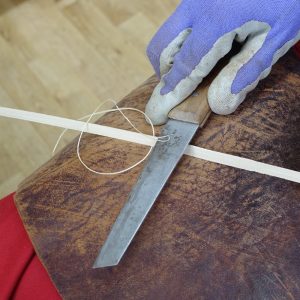 Rounding the edge of the cane.

One of the problems I needed to solve was that the material I had processed did not behave with the ease that I hoped it would. The joins were bulky and did not sit flat, despite their neat and considered design. The MERL shell basket has sixteen upright rods around the circumference of the shell. They are closely arranged which means that each woven rod has to make tight turns to repeat the weave: passing in front and behind. Despite soaking the split rods for at least twelve hours and wrapping them in a damp cloth to mellow, they were still difficult to handle. 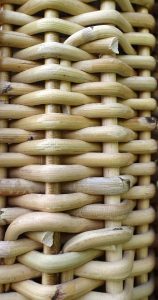 Closer examination of the research photographs led me to add in an extra process in their preparation. With the use of a shave, a basketmaker’s tool, I removed a section from the split edge of each rod, therefore reducing its thickness. 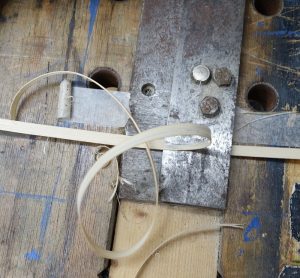 Shaving the split back.

Having made the decision to increase the soaking and mellowing times for the cane (to help with the flexibility) and shave the backs of the rods, I had high hopes that the cane would be easier to work with. I negotiated the tricky willow weave at the base of the former (mould), which had taken some time to decode, then started weaving upwards. It was certainly easier to weave with the slimmer rods. The joins were neater and the uprights less inclined to move from their vertical stance. However, the former tapers slightly and as the weave progressed I realised that further shaving of the backs of the rods would be required to work tight to the former as it decreased in diameter. Back to the workbench for more processing. 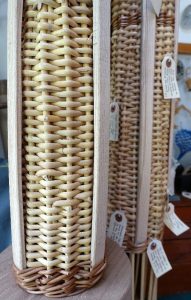 Processing by hand has been an interesting experiment, but is highly unlikely to be the method used by Dryad, the makers of the MERL shell basket. So, the question it raises is how and where was the processed cane produced during the First World War?