The first two study sessions, held on 17th June an 8th July, of the ‘Beyond the War Memorial’ project have now been completed. Dr Keith Vernon (the project’s Principal Investigator) and Dr Oliver Wilkinson (Research Assistant) welcomed a cohort of ten volunteers, all of whom have previously been involved in researching the fallen listed on St Mary’s Church War Memorial, Preston, as part of the Preston Remembers Memorial Challenge. 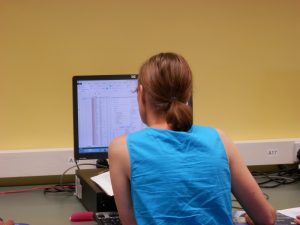 Upon their suggestion we began the first session by focusing on the area of Fishwick (East Preston) which is immediately adjacent to St Mary’s Church. Using the historic parish boundary we built up a list of street names within this area which we then used during the study session to filter the Harris Register data. Initial comparison of the Fishwick students listed in the 1914/15 register with those listed in the 1918/19 register revealed an increase in the numbers attending the Institute as well as a rise in the number of women engaged in study. Further analysis of the shifts based on age, gender and course of study is underway. Volunteers were also interested in the issue of wealth and access to education and, in collaboration with Keith and Oliver, attempts are being made to establish further details about the cost of, and payment for, courses undertaken at The Harris. The first session culminated with volunteers taking away lists of Fishwick students enrolled at the institute in 1914/15 in order to conduct further research into individuals. 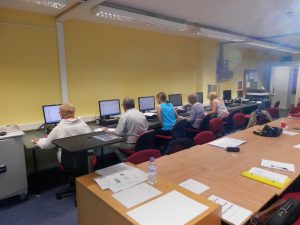 Initial research findings fuelled opening discussion when we reconvened three weeks later for the second study session in which we also welcomed two new members. Volunteers showed how they had used their prior research skills, honed by researching the war memorial, to great effect, finding details of student’s backstories and also gathering data on their war experiences and post-war lives. Familial connections had also been identified, some utilizing the study session to search the registers for members of the same families engaged in study at the institute across the war years. Other volunteers had been able to identify connections between those listed on the registers and those listed on Preston’s war memorials (including connections to the St Mary’s Memorial). As a result, this session supported individual volunteers to follow different avenues for their ongoing research: either continuing with research into the Fishwick students enrolled at the institute in 1914/15; progressing this to compare and explore Fishwick students enrolled in the 1916/17 and 1918/19 registers; or seeking familiar connections in patterns of study across the war period.

The two sessions have begun the exciting process of bringing the Harris Institute registers to life, enabling a picture of life, work and study in this area of Preston to being to emerge. It has been an unexpected bonus that the view may be able to be traced in a longer time span, in some cases enabling consideration of life, work and study before, during and after the war.

The next study session is scheduled for 12 August 2016.

Watch this space for further project updates including profiles of some of the students upon whom research is currently underway.