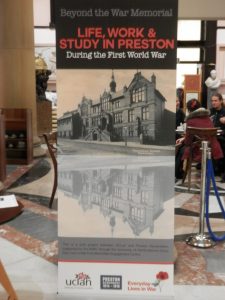 On Saturday 19th November we held our ‘showcase’ exhibition marking the culmination of the ‘Beyond the War Memorial Project: Life, Work & Study in Preston during the First World War’. The event took place in the Harris Library, Preston; the location seeming particularly fitting given the associations between the history of the building and of the Harris Institute which has been the focus of our project (based on the class enrolment registers of students who attended the institute during the First World War). Moreover, the library sits at the hub of Preston, featuring in the daily experiences of those who now live, work and study in the city.

Our exhibition, which ran from 11am to 3pm, took place in the main lending library and was held in conjunction with the Arts and Humanities Research Council’s ‘Being Human Festival’ (which ran from 17th – 25th November). The theme of this year’s festival was ‘Hope & Fear’. We felt that this was appropriate to our project which has unveiled wartime engagement in education (and the opportunities that such engagement afforded people) as a potential avenue of ‘hope’ that existed in a context of fear and loss connected to the war.

Our displays featured information about ‘Education & the First World War’, ‘The Harris Institute in 1914’ and ‘About Our Project’. We were also able to showcase our research about the lives’ of students who came from the Fishwick area of Preston. Our volunteers had prepared excellent narratives (35 in total) of some of the Fishwick students that they have researched, such as Percy Addison, a sixteen year old lad studying weaving at the Harris in 1916 who went on to be a pilot in the newly formed Royal Air Force (and whose uniform and flying log book are held at the Museum of Lancashire); George Life, the superbly named language scholar who worked with his father as a gardener in Preston Cemetery (Life in the Cemetery!); Fred Dobson, a student of music at the Harris in 1914/15 who we suspect went on to lead what the papers dubbed ‘Preston’s Greatest Orchestra’ before forming his own band, ‘Fred Dobson & his Super Six’; and Ethel Rhoda Elizabeth Williamson, a clerk who studied commerce at the Harris in 1918 and who qualified to become a clerk for the Ministry of Labour where she was still employed at the outbreak of the Second World War. 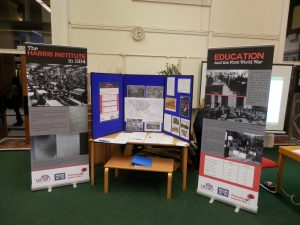 Visitors could browse these narratives which were accompanied by contemporary photographs, newspaper clippings and primary documents. Three of the project’s volunteer researchers, along with Keith Vernon (the project’s Principal Investigator) and Oliver Wilkinson (Research Assistant), were also on hand throughout the day to chat to visitors, explaining the project and alerting people to the information contained in the class registers of the Harris Institute (accessible in the University of Central Lancashire’s Special Collections). We talked to around 25 people and found a strong appetite amongst those already engaged in genealogical research who previously knew nothing about the registers – but who were keen to find out more! 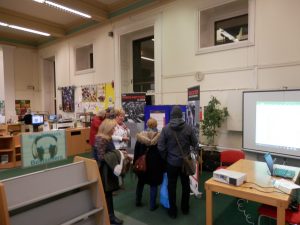 In addition, the library afforded the opportunity to have our digitised versions of the wartime registers available for visitors to search. We were therefore amazed when the very first participant found a student who lived at his current home address. He uncovered that in 1914/15 an adult student, aged forty, who worked as an overseer, lived at his current house and was enrolled at the institute studying ‘Heat Engines’. These details were noted down and the visitor was intrigued to find out more about the former resident! Others searched for their ancestors via surname and found potential matches to follow up.

Overall, we were pleased with the showcase and have already been discussing ideas as to future venues and locations for the exhibition. We would like to take this opportunity to thank all visitors to the exhibition, the staff at the Library and, especially, our volunteers for their hard work and commitment to the project. While the exhibition marked the culmination of this Collaborative Community Project, funded by the AHRC ‘Everyday Lives in War’ First World War Engagement Centre, we anticipate subsequent phases to our research. Ongoing co-production is anticipated and our research findings will continue to be published on Historypin (search for ‘Beyond the War Memorial). We also have plans for several publications based on our research.

Anyone interested in further details about the project (including future involvement) should contact Dr Keith Vernon at the University of Central Lancashire.