Samantha Little is part of the group researching Farming, Fishing and Food Supply in Devon during the First World War, led by Professor Henry French at Exeter University. She is the Writer in Residence at Brixham Heritage Museum.

In this extract we hear of fisherman George Bridge’s encounter with an enemy submarine. 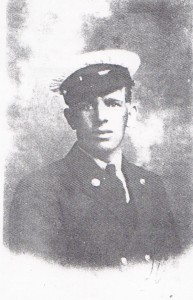 Towards the end of the year [1917], George Bridge had a further encounter with the submarine menace, giving a lucid account in his memoirs: ‘After spending a few more months as Cook on the Terminist, I thought it was time to have a change, berths being plentiful, I joined the trawler General Leman at a higher wage, one pound per week, which was a good wage in those days. She was registered at Milford…but sailing out of Brixham, a fine ship, only about two years old. We left port with several other vessels…hoping to fish a trip of seven days or more and having…taken on board the usual food, ice and coal, but things didn’t turn out as expected…very much the opposite.

We arrived at the fishing grounds the same evening, well to the Eastward of Berry Head, casting our trawl over board about midnight to tow the six-hour ebb tide, heaving it in at daybreak, and landing a good catch on deck…began to sail to windward with hopes of trawling again on the next ebb tide. At about 11 o’clock, we sighted…the Boy’s Friend, running on the starboard tack with a large pointed flag named a “Burgee” flying from her mast-head denoting something was amiss. She was carrying all the canvas she could set and passing close under our lee, hailed our Skipper, telling him there was a German Submarine in the vicinity, so we…sailed away on the starboard tack, a few points closer to the wind than our informant, hoping to sight land in West Bay. It wasn’t long before we saw three [Brixham] trawlers laying quiet with their staysails lowered waiting for the breeze to freshen, the ebb tide making about 1 o’clock, so we felt more confident with company and laid quiet with them.

By now, the dinner was cooked, so I served it up in the cabin at 12.30, taking my position on deck while the crew dined and being relieved went below to get my meal and clear away the dishes, but just as I began to eat, a lot of shouting caught my ears, coming from the deck…“Come up here boy, you have better eyesight than us”, and there she was, a U boat, sitting pretty in the centre of we four trawlers…So assuring the crew it was a “Tin Fish”, nickname for Submarine, we prepared our small boat for launching, and also set every stitch of canvas, hoping to beat the retreat, and maybe escape, at the same time I was told to go below and get some corned beef, sea biscuits, and also a beef kettle of water, but whilst below a shell passed just ahead of us, the noise giving me the quivers, so all I collected and brought on deck was the water contents. 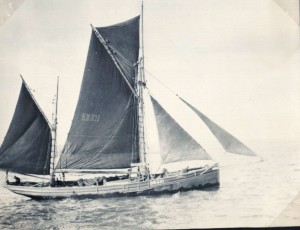 There was only one thing to do when a shot crossed your bows, down stay-sail, and wait for it. In the meantime, the other ships were getting full attention, a few well aimed shells soon disabling them, bringing down sails and spars, and eventually finding their water-line, the inrush of water sending them on their last journey. During this time we launched our small boat, which carried a keg of fresh water and a few biscuits, stowed in a locker, also a box compass, a mast and long-sail, we also put an anchor in the boat for ballast when sailing. I also placed the beef kettle, a large saucepan containing as I thought, drinking water…but in my excitement I forgot it contained cabbage water, and the remains of the potatoes I had cooked for dinner, believe me, we didn’t need cabbage water when the enemy began to shatter our ship.

We left in the small boat, in line of fire, so our first thought was to row clear of the target area…we should have been blown to atoms, for the shells were just missing us…the Submarine coming closer and closer to the ship, having already scored a few hits, but her sails and masts were still standing. They went alongside and boarded her, maybe to get some fish and…find some confidential pamphlets or books, as issued to all ships, of course all those were destroyed, burnt in the boiler fire. After a short time they left, having set a time bomb, I should guess amidships, she sailed away to Westward out of sight…we rowed for half an hour towards our ship as she did not seem to be sinking, when up goes the lot, and down she goes to join the other three already sunk, the dinner I was going to eat still where I left it. 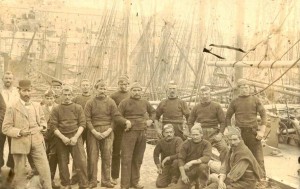 As night closed in on us, it became very cold and foggy so we kept rowing to keep ourselves warm…After we had spent from 2 o’clock to midnight in our small boat, luck came our way, for a large Naval Minesweeper…based at Portland bore down on us…On boarding the rescue ship, we met one or two other trawler crews, the U boat having been busy that day, anyway, we were provided with a good feed of hot stew, which we…needed after 10 hours in the small boats, and after two hours steaming along at eight knots, we were placed on board the hulk London City, about 2.30, the tug Dencade landing us at Brixham pier-head, about six crews, 24 men and boys…of course, we were greeted by the locals, even at that time of the morning, for news always seemed to travel when anything happened to the trawler fleets.

Not a soul was lost, again showing the regard the Germans seemed to have for the fishermen…still, I cannot remember one man or boy losing his life by gunfire or drowning on trawlers sailing from Brixham…and we lost about 10% of the fleet, which numbered about 300 ships at that time.’