In June 2015 the Heritage Lottery Fund awarded a grant to Arundel Museum to explore the story of how the town of Arundel responded to the problems of keeping the town fed during the First World War. In the piece that follows, Rita Godfrey, reflects on how the team went about their research and presenting what they found to a wider audience.

At the outset of the project we had hoped that we would be able to paint a picture of Arundel in the First World War and how people dealt with the issues of the provision of food. We had hoped that we could identify and show what was different for the people of Arundel and where they were under the same pressures as the rest of the country. We also hoped to find some original recipes to demonstrate this.

The idea was to carry out research then to present the results in a series of talks, cooking demonstrations and other information to be made available at the museum.

As always in some areas the results were over and above what we could have hoped for and in some disappointing.

The research group, eight in all, were formed of museum volunteers. We asked questions such as how this impacted on the people of Arundel? How were tenant farmers locally affected by conscription and the call to produce more arable and root crops? Did the pressure of food shortage divide or bring together the community? How did people respond through growing their own food? 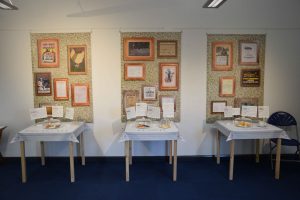 The research was carried out over six months and the members of the research groups were given specific information sources to work on. The group met regularly to exchange news on findings and to discuss whether we needed to expand or to change the focus of the research.

The research brought to light the specific ways in which Arundel people benefitted from the relationship with the Arundel Castle and the Norfolk Estate. Because the Norfolk Estate owned the majority of houses and land around Arundel at the time we also benefitted from the use of the Arundel Castle archives, where we discovered previously unknown documentation of the ploughing of land under the DORA regulations, the provision of meat from the deer herds on the estate when the first meat queues took place and the waving of the rules around fishing in the river during the war years, but only for consumption in Arundel. Because of this we could also follow the growth in the provision of allotments for people to grow their own food. As a bonus, we also found letters on the set up of a ‘pig club’ locally and the rules for the Arundel Estate pig club, what a bonus.

The research in the Arundel Castle archives brought to light a great deal of previously unknown documents, and was beneficial for the archivist as well as the museum.

Meanwhile the local newspaper archives, although not having much specific information on Arundel and food, gave a us a really good background picture on the state of play in the country followed through the years of the war. 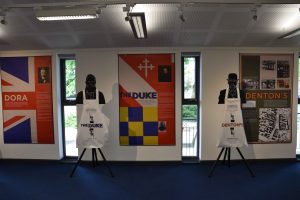 Early in the project research we were disappointed to find that the Town Hall records had been destroyed. Imagine our delight then when we found the Arundel BOROUGH Council records in the West Sussex Records Office. We had been looking for the wrong thing! At the time, Arundel was a Borough Council which included the Town Council. A good lesson there to be a bit open minded when searching for evidence. These records included minutes of the Arundel Local Food Committee, the council sub-committee for Lands and Allotments and the sub-sub-committee for potatoes!

We also had a lot of help from other museums and academic bodies including: University of Hertfordshire, MERL (Museum of English Rural Life) The Garden Museum, University of Kent Gateways, National Farmers Union

From the research a booklet was produced to include not only the results of the research but recipes of the time. The aim was to provide information on the subject in an accessible way and to make it available to both residents and visitors to the town. Research stopped three months in advance of the publication of the booklet to allow enough time for us non-experts to produce it.

The A Taste of the Home Front Booklet will be on sale at the Arundel Museum shop and will continue to provide information for visitors and funds for the museum over the length of the remembrance of WW1. It has also been taken up West Sussex Libraries for sale in libraries in West Sussex and by MERL (The Museum of English Rural Life) at the University of Reading. We have also approached Arundel Castle and are hopeful they too will offer the booklet in their shop.

We had hoped to include the results of the research in the Arundel Food Festival as cooking demonstrations. Sadly, the Food Festival did not take place. Instead Arundel Museum ran a Food Then and Now Event showcasing food in WW1 and local food. This took place over the weekend of May 14th/15th 2016. The event included:

The two cooking demonstrations were carried out by a local food historian, Sam Bilton, who provided a fascinating mix of cookery and history for the audiences. A free leaflet was produced for people to takeaway, incorporating the recipes. This leaflet was available for the whole length of the exhibition and many of the recipes formed part of the final booklet which was produced at the end of the research.

The outside market aimed to combine a look at some old foods and link to modern foods through the promotion of local food producers, including a producer of ‘Bone Broth’. 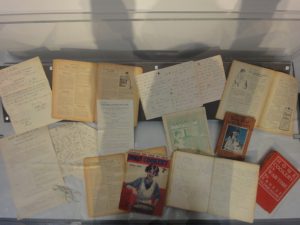 The Food Then and Now Event event included a talk on the research and the findings. It was an opportunity to go into detail on the exciting findings of the research and included background on the issues of food production during the war and the specific issues around food production for Arundel. It followed the war through and charted the changes as the war progressed. It was a sell out with an audience of 40 people. Samples of the recipes discovered from the time were provided to give an all-round experience!

At the beginning of the project a talk was held in August 2015 at Arundel Library, there has also been a follow up talk at Arundel Library, organised by West Sussex Libraries and commemorating the 40th birthday of the library. Another talk is planned for 2017 to a group in nearby Rustington. The museum outreach group are also looking at how the exhibition and research results can be used in work with local schools.

The event Food Then and Now Event included the exhibition. The exhibition was an exciting and innovative presentation of the findings of the research of the Taste of the Home Front Project. Designed by Jonathan Potter who was the designer for the main museum displays, the exhibition consisted of wall hangings, exhibits of documents discovered during the research, and displays of example meals to demonstrate the findings of the research, accompanied by information on the ingredients and the background to their production.

It highlighted the special links between the town, the Castle, farmers, shops and the people during the war through the story of the different types of food, for example meat, wheat, fishing and rationing. It linked the background of food production and regulations from DORA with the tenant farmers on the Arundel Estate and the local shops through pictures, documents and photographs, examples of meals.

The exhibition was designed so that it is mobile and can be used for future talks on the project and the subject of food in WW1. Talks have already been carried out at Arundel Library on December 16th 2016 and another is planned for a local women’s group in June 2017. The exhibition was also reused at the launch of the A Taste of the Home Front Booklet at the museum in November 2016.

‘Bake a Trench Cake’ was included as one of the classes in the Produce Section of the Arundel Flower and Produce Show, both in 2015 and 2016. A recipe was given to all entrants of the class so that everyone baked to the same recipe and a leaflet produced so that visitors to the show could learn more about the cake and its background of WW1. A display board was also put up with information about the cake and the Taste of the Home Front Project both to inform and to encourage involvement in the project. It was a popular class with 9 entries in 2015 and 7 in 2016. average entries for produce classes is 5/6 (per class)

The Trench cake will also be included in the 2017 & 2018 shows so that it will continue to be part of the World War 1 remembrance.

At the beginning of the project we ran a session to decide which areas and sources of information individual group members would take on. We identified what the sources were, what evidence we might be looking for from each source and how to collect and store evidence. A part of this session a. information sheet was handed out on how to carry out research and how to record results.

Regular meetings were held throughout the project and sources / results were discussed, new sources were identified and where new areas of research had opened up.

A workshop was also run when the exhibition was designed. With Jonathan Potter the designer the group worked together to agree the best approach, important elements of the findings and how best to present them. This was both useful and enjoyable as most individuals had not been involved in this sort activity before.

At the end of the project the volunteer group also met to agree the contents of the final report.

So, in short, we think that the amazing thing that the project did achieve was to bring to light dozens of documents that had lain unseen and unknown in the Arundel Castle archives, the Records Office and the newspaper archives and bring their contents into the light for people to share and see how special our town is and was during the war years. It allowed us to be able to put all that into a booklet for everyone to find out about our special history and along the way to make sure that Arundel Museum continues to provide this information to Arundel residents about their home town. And to contribute the wider knowledge of WW1