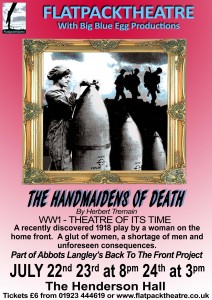 As part of the Abbot’s Langley’s ‘Back to the Front’ project the Flatpack Theatre Company will be performing Herbert Tremaine’s Handmaidens of Death, a First World War play which deals with the experiences and concerns of a group of women munition workers. Herbert Tremaine was the pen name of Maude Deuchar, who lived in Letchworth, Hertfordshire, and in this play she tackles issues of loss, class and gender.

The Flatpack Theatre Company will be performing the play at the Henderson Theatre, Abbots Langley on July 22nd & 23rd at 8p.m., and July 24th at 3p.m. Tickets cost £6. For more details see their website here.

This play is one of many from the wartime period which are now being rediscovered. Andrew Maunder (University of Hertfordshire) is a member of the Everyday Lives in War Engagement Centre and has been spreading the word on these ‘lost’ plays since 2012, bringing them to new audiences. For more on this and other ‘lost’ plays see his recent publication British Theatre and the Great War, 1914 – 1919: New Perspectives (2015)