This project is a research partnership that brings together the University of Exeter and Devon History Society, as supported by the AHRC-funded ‘Everyday Lives in War’ Engagement Centre at the University of Hertfordshire. Working with representatives from various historical societies across the county, the project is additionally benefitting from collaborative input by the HLF-funded ‘Devon Remembers’ scheme, which is working with regional communities on a variety of First World War themes. 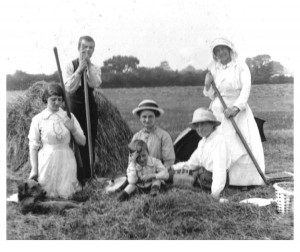 Photograph reproduced with the kind permission of Brentor Living Archive

This project is designed to focus on the over-arching theme of farming, fishing, food supply and agrarian industries of the rural county of Devon during the First World War. With two separate coastlines, and sharp distinctions between the upland, pastoral economy of Dartmoor, and a more mixed lowland agriculture to the south, east and north, Devon offers not one but many stories about these topics. The project has three key objectives:

1) to examine rural life during the latter part of the conflict from 1916, as food shortages worsened because of the submarine blockade, and conscription and government intervention affected the rural and maritime workforces

2) to bring together a broad range of local and community history groups to research common themes, share findings and exchange ideas about sources, methods and results
3) in association with DHS to showcase project outputs through activities such as a conference, symposium events, publications in 2016 and 2017 and to create a lasting research infrastructure in Devon, with an organisational template and networks between groups that future collaborative research projects can develop.

As a community researcher-led project, its overall aim is to facilitate county-wide research about the impact and social change that the First World War had upon Devon’s communities. In particular, it seeks to assess how these communities coped with the challenges of producing, growing and consuming food resources over the course of the conflict. The project is therefore honing in on a series of interrelated themes;

Supported by this framework, Community Partners will be reporting back on in-depth findings and new knowledge derived from their analysis of material from key data sets held at local and national archives. The primary intention is that, by exploring and interpreting documentary evidence that relates to a representative sample of parishes across the county, the project will present the local nuances to the overall regional picture of life on the Home Front. In rediscovering these largely untold local stories, the project thus seeks to shed light upon Devon’s contribution and the key role it played towards the national War effort. 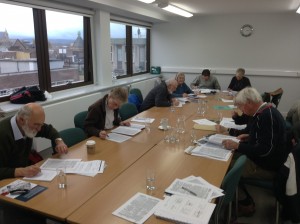 Since receiving further funding from the Engagement Centre’s Research Fund in the summer, we have now held two project workshops in Exeter. Beyond providing contextual historical information, these have allowed our participants to hear from researchers with existing expertise relevant to the project’s core themes;

These informal sessions have also prioritised group interaction and the accumulation and sharing of knowledge through discussions and hands-on activities, such as a practical exercise using some Devon-based entries from the 1914, 1919 and 1923 Kelly’s Directories.

In the New Year, our chief aim is to start providing our volunteers with access to archival resources held at the National Archives, to enable them to start analysing these historical records. We are also co-ordinating plans for a third workshop to take place in February, and will be building up the project’s online profile.