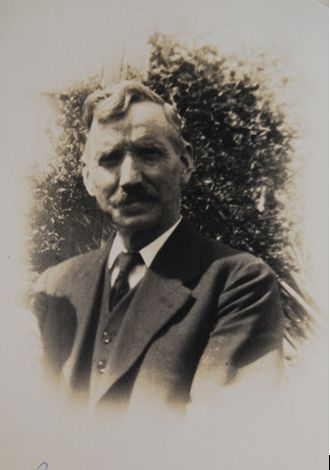 William Dunning (Reproduced by kind permission of his family).

William Dunning, the Dartmoor farmer whose life I am researching for a book, mentions a Methodist preacher called ‘Bennett’ (sic) several times in his wartime diary, and this caused me some headaches: were they all the same person? William listens to him preach in the chapel at Providence in Throwleigh on 30th January 1916, and all the Dunning family go to a Missionary Meeting where Bennet (sic) is speaking at Whiddon Down in February. ‘Bennett’ is one of the preachers at Providence on 14th May, and then there is no mention of any ‘Bennet’ or ‘Bennett’ preaching locally until 24th July 1918, when ‘Rev. Bennett Minister’ is at the Whiddon Down Methodist Convention, and in the evening William hears, ‘Lecture 7.30 by Rev. B: on Peter Mackensie (sic). Fine time.’ By the 1920s William had become a regular lay preacher, and only mentions other preachers intermittently, but the Chagford Circuit Programme includes the name of a local preacher, ‘R. Bennet, Chagford’ in 1921. I am going to try again to unravel these people, who had appeared to me to be one person, although, on reflection, only a Minister and not a lay preacher would be called ‘Rev.’, and only once is a ‘Rev. Bennett’, mentioned.

The Rev. Bennett was not difficult to locate in The Western Times of Friday August 9th 1918. ‘…Rev. W. Bennett,’ the paper informed its readers,  ‘chairman of the Tiverton District, who presided at the annual Convention of the Chagford Circuit, held at Whiddon Down, also gave an interesting lecture on  “Peter Mackenzie, his wit and humour.”… ‘ I have already described what his lecture might have been like, but I haven’t mentioned what a frankly gluttonous affair the Convention would have been, starting with a service followed by a huge luncheon with enormous joints of meat, followed by a feast of puddings with lashings of cream, then a walk around (no doubt looking at local farmers’ fields), a copious tea and a service and supper to finish off. My farmer’s grandson described all this to me and I tape-recorded it.

But what of the Bennet who preaches and then vanishes in 1916? This is still uncertain: can he be the same Methodist preacher, ‘R.Bennet, Chagford’ who appears in the 1921 Methodist Circuit Programme? Then there is the question of ‘Russell Bennett’ who goes as a conscientious objector before the Okehampton Rural Tribunal in October 1916, and is described as a United Methodist and an intimate friend of Rev. Putt, the Minister at Whiddon Down. This Russell Bennett had two brothers serving, one of whom had been killed. There is a Russell Bennett, son of Henry and Emma Bennett of Week Brook, Forder, Chagford, who was born (according to the school Attendance Register) in November 1897, so he would be 18 in October 1916, the date of the tribunal. He had three elder brothers, Robert, Charles and Arthur. Charles had recently enlisted, (although his military record raises more questions than it solves). Arthur, who was a private in the 2nd Battalion of the Devonshire Regiment serving in Flanders and France, had died of his wounds on 9th May 1915. I feel fairly confident that this Russell Bennett, Arthur’s younger brother, is the conscientious objector and also the lay preacher in Chagford in 1921. I must admit that he seems rather young to be the 1916 preacher. This research using parish registers, birth records, school admission registers, military records, Methodist Circuit records, an internet book, oral history, contemporary newspapers and a farmer’s diary, is time-consuming and difficult, but it has helped me to glimpse one part of my farmer’s world during the First World War.  Jacqueline Sarsby

Dr Jacqueline Sarsby is a social anthropologist, oral historian and photographer. She was a full-time lecturer at the University of Kent before going free-lance. Among other books, she is the author of ‘Sweetstone, Life on a Devon Farm’, published by Green Books.