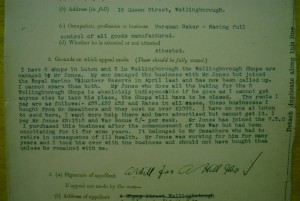 Dr. Sally Sokoloff is former head of History at the University of Northampton. Northamptonshire is fortunate in that the records of its Appeal Tribunal survive and are available for researchers to explore. In this article Sally introduces the records and their value to local historians.

A full set of papers from a county appeal tribunal – documents from the Home Front that should not have survived at all – can be revelatory, as Phil Spinks explains on this website about the Warwick tribunal. Similarly the Northamptonshire Appeal Tribunal collection calls for understanding of the military exemption system with its thousands of local tribunals, run by volunteers and rooted in communities. Next is to realise that tribunals were not only about conscientious objectors: around 1% of appellants to the Northamptonshire tribunal were such. (Middlesex’s unusually large 6% of CO appellants indicates a wider politicisation over the issue in its tranche of outer London.) This leads us to the rest – the many men of military service age, possibly over a half of those eligible for conscription between 1916 and 1918, who took measures to postpone or avoid military service. Explaining their case for exemption at public tribunals was no laughing matter at a time when the recruitment movement, propaganda, and even the Suffragettes exalted those men who had stepped in to defend their country since 1914. 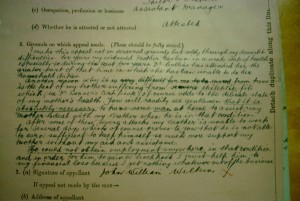 A personal hardship appeal by John Wilkins, a tailor

Men had to explain themselves in their exemption requests and appeals, and this is where the tribunal papers offer wider and tangential rewards to the historian of the Home Front. The appeal tribunal papers for Northamptonshire contain about 11,000 cases. Where employers such as boot manufacturers cooperated with the tribunals to shed male labour into the army, the records simply list the names of the skilled men chosen for retention on the home front, and we learn little else of them. Beyond that, farmers, labourers, clerks, teachers, shopkeepers, butchers, slaughtermen, bakers, chimney sweeps, gamekeepers and servants, argued that as husbands and sons, workers, small businessmen, or productive cogs in local economies, they should be retained on the Home Front. The men most frequently in front of the tribunals in Northamptonshire were retail shopkeepers, food producers, and agricultural workers – precisely those who provided food and other basics to a population being pushed hard to sustain the war economy. As well as the forms on which appellants (and indeed the local tribunals) recorded their perspectives, some cases contain further ephemera of explanation and appeal – letters, business accounts, references, letters of denunciation, petitions, showing the rich social and occupational contexts of Home Front life. Some men write feelingly of their lives and families, of their obligations as men to others, showing that a complex civilian model of masculinity dating back to Edwardian and Victorian times survived wartime militarisation. 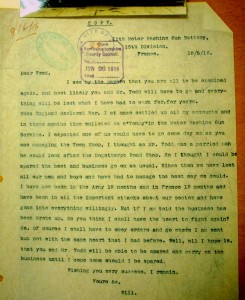 So the Northamptonshire Appeal Tribunal papers are a great trove for social historians of the war, particularly in relation to agriculture, the food trades, and small business. The state’s changing policies towards male (and tangentially, female) labour between 1916 and 1918 can be tracked. Oh, and the conscientious objector cases, over 100 of them, are worth a look. Some of the individual cases and the stories of lives and relationships are fascinating. It is quite rare to come across the written testimony of ordinary men of this period, though soldiers’ letters may come to mind. The purpose of the forms and supporting information in arguing a case, for exemption, and the opportunity to balance a man’s view against the verdict of the tribunal members who passed judgement, also adds focus and piquancy to this historical source.

The papers are currently being indexed at the Northamptonshire Record Office and will offer greater searchability from the start of 2016.

Researching the Military Tribunals in Warwickshire