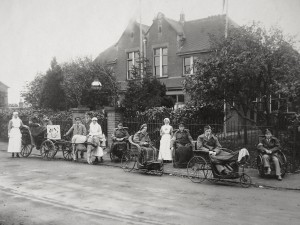 In the articles which you can read here, and which first appeared in The Rickmansworth Historical Review, Brian considers the particular story of the impact of recruitment and conscription on the local population. Drawing on local newspaper accounts of the work of the Rickmansworth Urban Tribunal which heard cases from Croxley Green, Brian explores how the Tribunals went about the practical work of deciding which men should be exempted from military service, and relates the stories of the men who appeared before them, including Conscientious Objectors, farm workers, watercress growers and owners of small and one-man businesses.

Brian’s research shows that even in the absence of detailed minutes from the Military Tribunals it is possible to build up a detailed picture of the economic and social life of local communities.

If you are interested in reading more of Brian’s research, his Croxley Green in the First World War is available price £6 from Rickmansworth Historical Society (http://www.rickmansworthhistoricalsociety.btck.co.uk/ ) and Three Rivers Museum (http://trmt.org.uk/ )

From Volunteer to Conscript Part 4 The Rickmansworth Urban Military Tribunal The Blacksmith, the Laundryman and the Hairdresser