Phil Spinks is researching the story of the military tribunals in Warwickshire. In this article he explores the way in which his research began and how it has developed over the past 15 years.

I first became aware of the First World War tribunals whilst on an Access to Higher Education course in 2000. My history dissertation was going to be on how the Russian Revolution was reported in local newspapers in 1917. However, whilst searching the newspapers (and trying desperately not to read the advertisements!) I kept encountering columns entitled ‘The War Courts’, or sometimes, rather quaintly, ‘Tribunalities’.

My first reading of these reports about the weekly local borough tribunal left me none the wiser for having read it. What was all this about? Who was doing what? And why? And why should they be doing whatever it was they were doing? And why should it be reported in a newspaper to the reading public (alongside Dr Coxon’s Blue Liver Pills puff)? I knew about conscription, but had never heard of the tribunals. Nor was I aware that there had been any chance for anyone to claim exemption – excepting conscientious objectors, of whom I had heard. And so it seems, right up to the present, the public have only ever known about conscientious objectors. Not the builders, farmhands, butchers, coalmen, musicians, teachers, blacksmiths, tailors, boot-makers, mechanics, desperate husbands and desperate mothers … 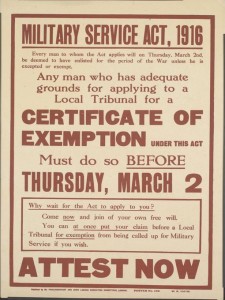 Ideas about the tribunals took shape after further close reading of the press reports: I began to understand the tribunals’ position relationship to conscription. Once I understood what work the tribunals were doing, I began searching for more in the archive. This was at the Shakespeare Centre Library and Archive in Stratford-upon-Avon. The archive not only has much relating to Shakespeare but an enormous collection of local material. A quick search of the archive yielded 1915 National Registration documents (my first link to the later Military Service Act); a certificate of absolute exemption kept neatly folded among the papers of its recipient; a brewery’s wages book for 1914-1919 that had employees’ exemption certificates pasted onto its inside cover. My plans about Russian Revolution reportage were ‘thrown onto the dust heap of history’.

Secondary source reading about First World War conscription and the war on the home front added to my knowledge of the tribunals, to the extent that I could read the press reports in an informed manner.

I set to and compiled, from the newspaper accounts, a spreadsheet database detailing names, ages, occupations, applicants, grounds of claims, and finally, disposal of claims. (Luckily this particular newspaper carried full details of all cases, unlike others in the county that anonymised their reports.) This was a very time consuming exercise and working full-time rotating shifts didn’t help.
Then came my ‘eureka moment’. I ‘phoned the county record office on the off chance they may hold some tribunal information. The answer was an invitation to go and see the boxes (boxes!!) and what they contained. The boxes were (then) in an out-store so we had to wait a week before my wife and I first encountered the original documents of the Warwick Appeal Tribunal. Masses of them! Each bundle bound in legal pink ribbon, the knots never seemingly having been untied. I determined then that sometime in the future I would ‘do something’ with this (rather rare) collection – all 1,327 cases.

My dissertation completed, I was very kindly invited by Dr Robert Bearman, editor of Warwickshire History, to prepare it for publication. My short study of the Stratford Borough Local Tribunal was well received and was later published in The Local Historian under the editorship of Dr Alan Crosby.

Although still in full-time employment I wanted to make use of the Appeal Tribunal documents. I hadn’t time to give to a full study, so I decided to select the conscientious objectors who appealed from south Warwickshire (the area covered by the tribunal), knowing their numbers would be few and the project easily manageable. The result was published in Warwickshire History, and later in The Local Historian.

In 2012 I was pensioned off from my career. In 2013 I entered Ruskin College, Oxford to study history. Before going to the college I had decided to base my dissertation on the Warwick Appeal Tribunal. The opportunity, and privilege, to use the Bodleian Library and the university college libraries was a great aid to my research. During holiday breaks I managed to complete a spreadsheet database of all the cases, the same as I had done for the local tribunal study. It was while working at the Warwick Record Office I was again invited to provide a study for future publication.

For the last fourteen months my wife and I have been visiting Warwick Record Office to work on the Appeal Tribunal collection. Having my spreadsheet saved a lot of time, but even so the work was hard going. Each case has been minutely considered. Some comprised two items, others over forty; each has been thoroughly recorded (and a catalogue reference system had to be invented, as the whole had never been catalogued); every case is described as a ‘case study’ of between 150 and 950 words, depending upon its complexity – and some are very complicated! We are now half-way through re-checking the 1,327 cases.