Monday to Saturday 10am to 5pm 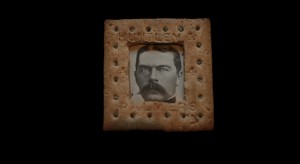 Image from the Huntley and Palmer archive held at the Museum of English Rural Life, University of Reading

The country’s largest biscuit factory Huntley & Palmers, a Quaker enterprise, played a crucial role during the First World War, supplying ration biscuits to troops on the front line. On August 12th 1914, the factory received the first of many substantial orders from the War Office to manufacture biscuits for the British army, which meant working continuously day and night for several weeks. As an example of the ration biscuits, the No 4 standard biscuit was made out of whole wheat flour, but contained no sugar, and measured about four inches square. The biscuits were very hard, but when the soldiers soaked them in water or tea, they became a substantial meal, providing badly needed sustenance. As well as being a staple of the army’s diet, some of the biscuits were creatively re-fashioned by soldiers in the trenches and sent home to friends and family with personal messages. Rather than being consumed, the biscuits were creatively transformed into picture frames, postcards and canvases.

These army biscuits have formed the inspiration for The First World War in Biscuits, which is a stunning audio-visual, object-centred installation that explores the relationship between food, creativity and conflict. Included is a unique collection of 100 year-old ration biscuits, personally modified by soldiers, alongside a range of archival materials, interviews, photographs and film-footage.

As well as being able to see examples of how these biscuits were crafted by soldiers, this exciting installation provides an opportunity to hear historians talk about the army biscuit and the significance of food during the war. Rachel Duffett, author of ‘Stomach for Fighting: Food and Soldiers of the Great War’ (Manchester University Press, 2012), discusses her research on the significant role food plays during times of conflict and reflects on the ration biscuits displayed in the exhibition. Andrew Robertshaw, who wrote ‘Feeding Tommy: Battlefield Recipes from the First World War’ (Spellmount, 2013), provides an insight into how ration biscuits were used in cooking, while David Bitton, author of ‘Reading in the Great War’ (Pen and Sword Military, 2014) assesses the contributions Huntley & Palmers made to the war effort.

This colourful exhibition is coming to the garrison town of Colchester during the First World War centenary, and brings to life the harsh reality of war and the conditions soldiers faced when fighting on the front line. The exhibition also reflects on the emotional and social role of the biscuits in the soldiers’ lives and explores the broader issues of separation and loss. Colchester has been an important military town since the Roman era, with the first garrison being established in 43AD after the Romans conquered Britain. During the First World War, several battalions of Lord Kitchener’s army were trained here, and now Colchester garrison is home to the British Army’s 16 Air Assault Brigade.

The audio visual story of Huntley & Palmers in the First World War has been produced by the Department of Film, Theatre & Television at the University of Reading. The installation was created by Dr Teresa Murjas (Associate Professor) and Dr James Rattee (PhD graduate) with assistance from Sonya Chenery (PhD student) and Laura Farrell (Researcher). The exhibition is supported by the University of Reading, the Museum of English Rural Life in Reading, Reading Museum, Arts Council England, the University of Essex, and the AHRC First World War Research Centre ‘Everyday Lives in War’.