Contributed by Victor Hulbert, Communication director for the Seventh-day Adventist Church in the UK & Ireland.

John Benefield was both a baker and a Conscientious Objector. Working in an essential industry he was exempt from the armed service as his skills were needed at home.

Nevertheless, every few months he had to attend a tribunal in order to re-establish his status. This took place in a court house 13 miles from his home in Bournemouth. As losses mounted the Tribunal became more strict, constantly looking for any loop hole they could to dispatch even essential workers to the front. His granddaughter, Elizabeth Yap, recalls that, “My grandfather attended 13 of these tribunals during the course of the war, leaving his wife and six children at home to pray for a good result.”

That prayer was fervent! Had the decision gone against him he would have been taken straight from the court house into the army with no chance to say goodbye to his family. Elizabeth recalls,

On the last occasion, as he was walking back home, he met my grandmother, who had walked 6 miles to meet him. He asked her why she was there, given she did not know the results of the Tribunal. Grandmother told him that she had been praying about the court case and God had told her grandfather would be freed and so, with no idea how long it would be before he was released, she decided to go and meet him.

John was one of the fortunate ones. Approximately 130 Seventh-day Adventist young men were conscripted between 1916 and 1918, some serving in Non-combatant corps, others spending time in prisons or work centres across the country. A generally pacifist religion, Adventists held strongly to the principles of the 10 commandments, including the 6th, “Thou shalt not kill”. They were believers in civil and religious liberty but could be described as ‘conscientious co-operators’ rather than absolute objectors to the country’s conduct in war. 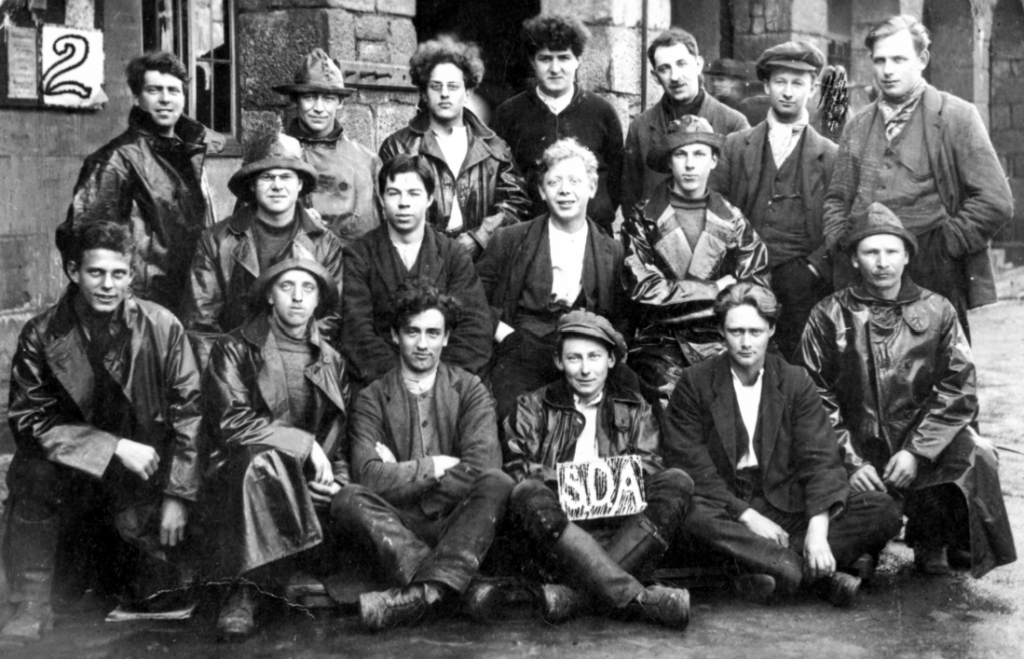 As such, they should have been treated with respect. Lloyd George, Secretary for War, stated in the House of Commons on 26 July 1916. “Of those who object to the shedding of blood, the traditional policy of the country is to respect this view.” Sadly that was not always the case.

When Military Conscription was introduced in January 1916, the Headquarters office of the Seventh-day Adventist Church issued certificates to every Seventh-day Adventist likely to be brought before a tribunal. The status of Adventist ministers came into question when F L Chapman was summoned to appear before the Police Court in Exeter, on 24 May 1917. He had failed to report for military service. Chapman was working as a minister, though not yet ordained. Witnesses testified that Chapman was a minister of religion and the Bench exempted him from military service. This was a test case for Adventists but also benefited ministers of other denominations. Soon afterwards the church registered the names of all their ministers at the War office.

Others were not so fortunate. The tribunals generally respected their refusal to bear arms – but that was the only exemption. William George Chappell worked selling Christian literature. He was called to a tribunal in Brynmawr, South Wales on 25 March 1916. In his notice of appeal he stated that “as I am a Seventh-day Adventist [I] am opposed to war.” Noting Bible verses that supported a pacifist stance he stated that he felt it more important for him to ‘go preach the Gospel’ than to be involved in the war.

The tribunal disagreed stating that his work was ‘not of national importance’ and only exempting him from combatant service. 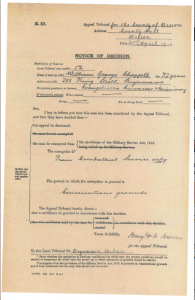 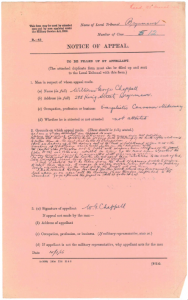 Many like Chappel were enlisted in the non-combatant corps and served both in the UK and in France. Arthur Ernest Sanders gained the same minimal exemption at a Watford tribunal on 25 February 1918. He spend the rest of the war serving in army kitchens. Others, unwilling to provide even that service, spent time in prison, 17 of them in Dartmoor. 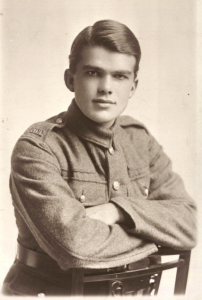 Tribunals occasionally had positive benefits. A groups of 14 Adventists had been successfully serving in an NCC in France for a period of 18 months. With a change of commander came problems, particularly with their request to not work on Sabbath (Saturday) in accordance with the 4th commandment. In November 1917 they were court martialled and imprisoned in Le Havre. There they were beaten, manacled, given the dreaded ‘crucifixion’ punishment, some of them coming within an inch of their lives. Their story is told elsewhere, but after intervention, they were moved back to England, spending Christmas in Wormwood Scubs prison – and event that the daughter of one of them, Alfred Bird, describes as being “a delight compared with the treatment meted out to them in France.”

She states that following a hearing by the Central Tribunal, and an understanding of the injustice they received, the men were released from the Army into civilian life undertaking work of national importance. According to historian, Dr Brian Phillips, that tribunal made a difference. He writes, “From that time Seventh-day Adventists in Britain have generally been allowed a choice of occupation of national importance in time of War.”

One of those fourteen, H W Lowe, became a leader of the Adventist church and in 1937 was called to the war office to meet with a lawyer. Listening to his harrowing account and discussing Biblical values with him, the lawyer recommended that Adventist young men should be exempted from army service in favour of work of national importance. In WWII they still faced the tribunals, but this time with a much more favourable outcome.

Victor Hulbert (Communication director for the Seventh-day Adventist Church in the UK & Ireland) is the great nephew of WWI Conscientious Objector, Willie Till. Victor tells the story in a moving documentary film, ‘A Matter of Conscience’.