My interest in shell baskets began with an Internet search of the Museum of English Rural Life’s (MERL) online collection. Having visited MERL some years before to view their amazing collection of basketry related objects, it was a good place to start.

The shell basket (MERL 90/43) can be viewed online as a series of photographs, with a physical description, accession details and measurements. To describe it simply, the MERL shell basket is a woven sleeve, made to fit tightly around an artillery shell, used in the transportation of shells by limbers, attached to a gun carriage and hung on the saddles of packhorses. Both ends are open, the larger protected with a rim of stitched leather. The small open end tapers in with a neat simple border. Above the leather at the large open end is a woven band of willow, which is repeated twice more. The weaving in between is split cane. Running vertically along most of the length of the basket are four wooden tapered splints. 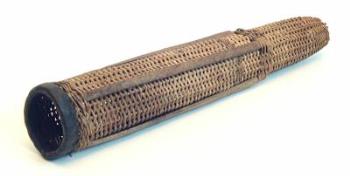 I noted that the making of the MERL shell basket, was attributed to Dryad established by Harry Peach in 1907. Making further enquiries brought forth a fascinating archive, the Dryad Committee Diary from the period of the First World War (courtesy of Alan Beavon). With the intention of making a replica, I felt it was important to see the basket for myself. So I travelled to Reading to meet Ollie Douglas, Assistant Curator at MERL, and view the shell basket.

My first impression of the basket was that it was much larger and longer than I had anticipated. With a background as a maths teacher, museum education officer and basket maker, it would be fair to say that my knowledge of all things military is fairly limited. It was a curious object, with a slightly sinister cyclic quality about it. Woven to offer protection to objects of death and destruction- those injured by the shells it protected, were then taught to weave baskets as a means of therapy and rehabilitation. All that being said, it should be admired. Designed for a specific purpose, with the need for a tight fit around a shell with a consistency of making and measurements, the construction is complicated and considered.

As my plan was to weave a replica basket it was important to record as much information as I could in the time available. I took out my sketchbook and pencil, and began to record measurements, diagrams and questions about the construction, with notes, in particular ‘check against photos’.

As a basket maker there were some key areas of interest that I needed to investigate, namely the materials, techniques, weaves and borders, with the question of how do you form a basket to fit exactly around a shell?

Returning to my studio, I set about trying to make sense of the information I had collected. I made enquiries with Castle Donington Museum who have in their collection some wooden formers for weaving shell baskets and photographs of workers in a local yard. These proved to be invaluable in making a former to match the MERL basket and designing a stand to weave on. 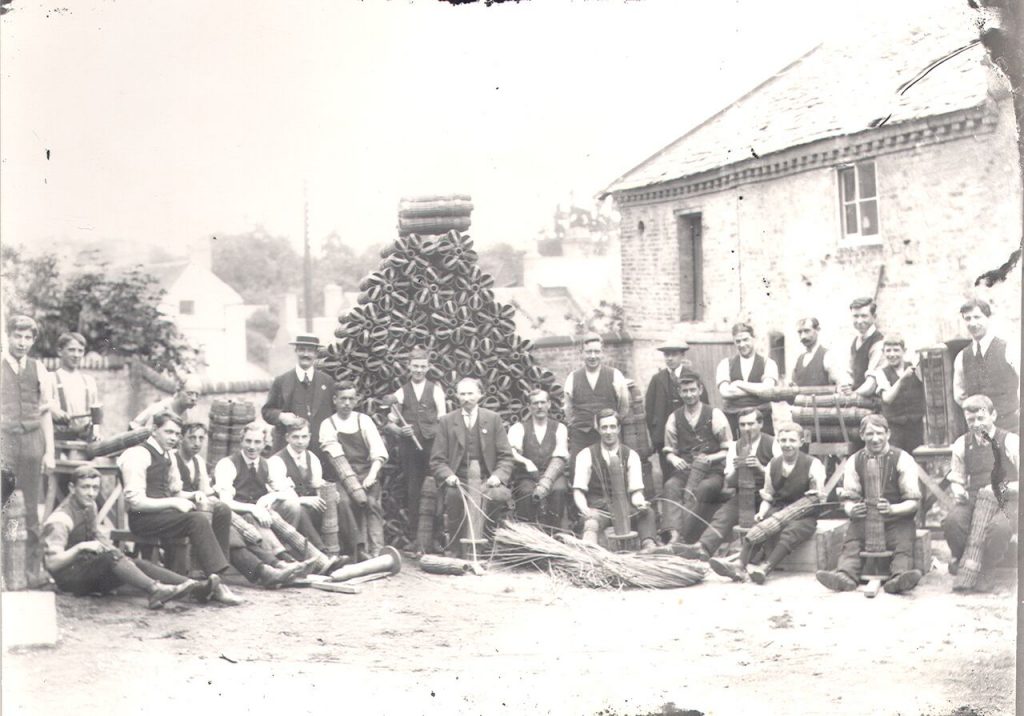 Making some decisions about possible measurements for the shell to fit inside the basket, I approached James Mursell from The Windsor Workshop to assist me in turning a wooden former, making a stand and shaping the side splints for the vertical sides of the basket. 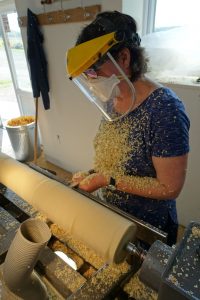 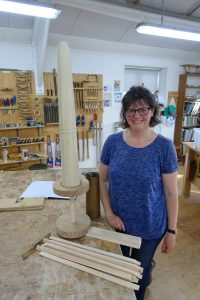 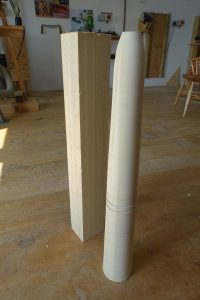 Former, stand and wooden splints completed I was ready to move one step closer to weaving.

My first difficultly was in deciding the type and size of cane to order. Here the Dryad Diaries proved to be useful. I noted the line from Feb 1915 “Palembang arrived (20 Tons)”. The Diaries also mention pulp cane (centre cane), used for orders of shell baskets. However the surface of the cane in the MERL basket was slightly shiny, which suggested Palembang rather than pulp cane.

Palembang proved difficult to source and having sought advice I ordered some Kooboo cane, which arrived at my studio as long lengths, ready for me to sort, cut and split prior to weaving. A process which proved to be time consuming and hard on the hands. Which raised another question. How was this job carried out on in the past for the makers of the shell baskets? 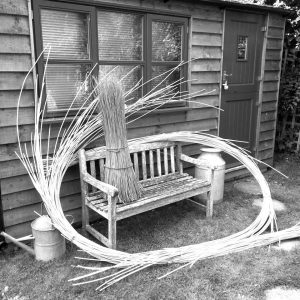 Former, stand and wooden splints completed I was ready to move one step closer to weaving.

This was the first time I had carried out my own research on an historical basket. What I came to realise was that despite taking notes, measurements and photographs there is no substitute for having an object in front of you to work from directly. More importantly the art of making the object has become lost and I can only puzzle at the clues left behind by the maker.

The Museum of English Rural Life