An edited version of this article by 100 Years of Coconuts appeared in the Cambridge United matchday programme for the game against Yeovil Town on 27 September 2016. 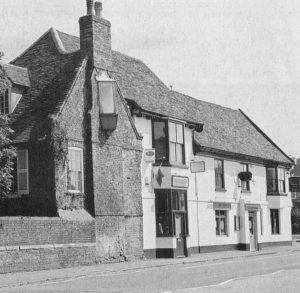 This may be one of those stories that will have you wondering what on earth it’s got to do with Cambridge United Football Club. Stick with it and you’ll see.

Got a few spare minutes? Cross Newmarket Road from the Abbey Stadium and wander a little way up Ditton Walk, on the opposite side of the road to what used to be part of The Globe pub and is now the Pipasha Indian restaurant. Cast your eyes to your right – pretty unremarkable housing, you’re thinking. Retrace your steps to Newmarket Road, turn left and proceed, eyes left, in an easterly direction. You’ll see the fronts of the same houses whose rears you saw in Ditton Walk – nothing much to get excited about.

But if you’d followed the same path before the builders got started on the Ditton Fields housing estate in the 1930s, you would have been looking at a field. The name by which it was known at the time – Hospital Field – reveals something of its history.

During World War I, the First Great Eastern Hospital operated in various sites in Cambridge, finally settling in the spot now occupied by the University Library. It gained fame for its treatment of wounded, mangled and otherwise damaged combatants – tens of thousands of them – in wards that were open to the elements. There was one category of patient, however, that was not treated for long at the First Great Eastern.

In 1915, two auxiliary hospitals were set up just outside the Cambridge borough boundary: one in Cherry Hinton and another, the 850-bed Barnwell Military Hospital, in Newmarket Road. In September 1915, Colonel Joseph Griffiths, officer commanding the First Great Eastern, addressed patients at the Barnwell establishment thus: ‘Soldiers of the British Empire: those of you to whom this is addressed have caught a venereal disease, usually, because you have been with strange women.’

Griffiths went on to urge his patients to co-operate with those charged with their care and treatment, so that they might get themselves ‘into a condition worthy of manly men’. These men were treated with suspicion within the hospital and fear outside. They were in fact more detainees than patients, and they were kept inside barbed wire fences. 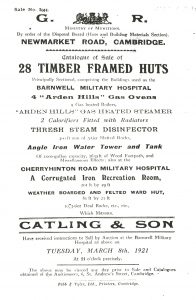 Many townspeople expressed outraged opposition to the siting of the hospitals on their doorsteps. Perhaps the anger and fear were justified: escaped patients plundered orchards in Fen Ditton, the town council was told; there had been attempted indecent assaults on Cambridge women; the Army’s promises about tight discipline and unclimbable fences at the hospital had not been kept. There were other incidents, including the burglary of the nearby Globe by members of a hospital-based gang, who left with a rich haul of alcohol and tobacco.

One councillor suggested the men should be given distinctive uniforms so that townsfolk could spot them easily and ‘shun them as they would a leper’. Such harsh measures were not introduced, but the hospital’s security was tightened with a doubling of the guard, which was formed by military police officers.

One of the Redcaps charged with keeping the inmates in was a young Irishman who, after the war, settled in Cambridge. In 1934 he formed the company that would become Progressive Coaches and transport U’s players and supporters all over the country and beyond. He also owned the Camtax taxi firm.

His name was Albert Edward Harris (although everyone called him Paddy) and he served as a director of Cambridge United for 33 years before stepping down in 1983. It was fitting that his unusual introduction to Cambridge should take place just a few yards from the place that would become his second home.

Guillebaud, Philomena. From bats to beds to books: the First Eastern General Hospital (Territorial Force) in Cambridge – and what came before and after it. Fern House, Haddenham, 2012 reprinted 2014.