This HLF supported project brought together Whitworks Adventures in Theatre (http://watheatre.co) and Year 6 pupils from Grassmoor Primary School in Derbyshire, to recreate something of the lives of children at the same school 100 years previously. In this article Paul Whitfield shows the fantastic range of information that was to be found in the school’s log-book for the First World War years.

The Year 6 pupils of Grassmoor School in Derbyshire – the Class of 2016 – have spent their final summer term at the school working on a project to discover what life was like for their equivalents 100 years ago – the Class of 1916. Then named Grassmoor Elementary School and working with children up to the age of twelve (the end of compulsory education in 1916) the school existed on the same site and in the same buildings.

We were lucky enough to find the Grassmoor Elementary School log-book from 1916. Mr Charles Mason, the Headteacher for 28 years including those of the First World War, filled in his log books with real care, detail and individual personality. In many ways they read more like a personal diary than an official document. As a result they make fascinating, entertaining and enlightening reading. They provide a vivid insight in to everyday lived experience in the years of the First World War.

Morgan, one of the Year 6 pupils involved in the project, put it beautifully;

“Mr Mason is still alive in his log book.”

The lives of the Class of 1916 and the Class of 2016 were, of course, different in very many ways, but some of the preoccupations of school authorities remain the same. The log-book reveals that, just as for today’s headteachers, pupil attendance was a major concern for Mr Mason. The Attendance Officer is mentioned a number of times, in February fining the parents of one boy, James Haslam. Mason glows when attendance peaks at 95.3% in April, but 1916 ends badly with figures down to 89%. “Very poor” laments the despairing Mr Mason.

The log-book reveals that he is under enormous pressure to keep numbers up. There are competing demands on children’s time. The parents of Oscar Harper and the farm bailiff of the Grassmoor Colliery Company make repeated requests that Oscar be released from school to help with farm work. In April Mason reports problems with boys truanting to go “coal picking” (scavenging fuel from the colliery slag heaps). He is “obliged to take strong action” to deal with this “pernicious practice”. He seems to manage to stamp out the bunking off at least. By the 7th April Mason comments “Many boys go, but in nearly all cases out of school hours.”

Mr Mason is particularly vexed by the enforced changes in school hours and the impact on attendance and children’s work. School times were changed because of fear of Zeppelin raids. The school day was required to finish before dark. German air raids were rare occurrences, but the fear of them was clearly significant and had a tangible impact on people’s everyday behaviour. An early start and a shortened lunch time meant that the school day was over by 3.00pm. In December, relieved that the previous times will be restored after Christmas, Mason writes;

“For the past two months the school work has suffered materially though not necessarily the earlier hour of the morning session, but rather the short dinner hour. The strain has been great and much time has been wasted.” 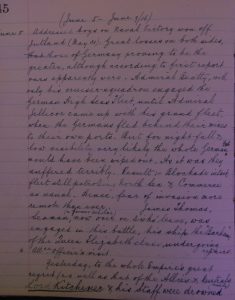 Mr Mason was a patriotic supporter of the war effort. One entry is emphatically underlined– the drowning of Lord Kitchener. On the 5th June Mason “addressed boys on Naval Victory won off Jutland.” He is particularly proud that an ex-pupil, James Thomas, is serving on the Super-Dreadnought HMS Barham.

This support extends to big efforts to encourage pupils to raise money and donate support to the war. Boys are cajoled to bring in eggs for wounded soldiers. This garners 12 in the first week, 5 in the second and 10 in the third. Mr Mason is far from impressed! Later in March, however, 17 eggs are delivered; “Webster brought nine.” Mason records the landmark achievement of 100 eggs in early May. Another favourite cause was the YMCA Huts Fund. The YMCA provided ‘recreation centres’ serving refreshments and offering reading materials for servicemen in Britain and France.

Mr Mason’s other great love is football. He writes in detail about the boys’ matches, accounts reading more like newspaper reports than simple recording of results. In late February there is heavy snow. Mason comments “Very trying. No football.” This is a passion he shares with his assistant teacher, George Rushton, for whom Mason has enormous affection and respect. Rushton is a young teacher who joined Grassmoor Elementary in 1916. In January 1916 Mason reports “Mr R being called up soon.” Mason wants to appeal against the call up, but the Education Committee won’t let him.

The log-book follows Mr Rushton’s military progress through 1916. February 1st is his last day at Grassmoor. His leaving present is an “illuminated wrist watch”. This is an expensive and high status present, showing the esteem in which George Rushton is held. Wristwatches only came in to common usage during the First World War, and it was rare for someone who was not an officer to own one. George Rushton leaves Grassmoor to become Private G Rushton of the 2/6th Battalion Sherwood Foresters ‘C’ Company and begins his training at Watford.

The log-book notes that George is back on leave towards the end of April, before being deployed in the British Government’s response to the Dublin Easter Rising. Mason says he is “involved in stamping out this rising…… quite well after his baptism of fire.” Even in his absence, Mason applies to have Mr Rushton’s salary increased in December. 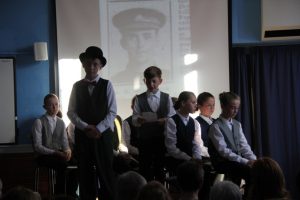 This project was focussing on 1916, but we do know that George Rushton was sent to France in April 1917 and was killed in action within 10 days of arriving. He left a fiancée, Sally Scothern, in Grassmoor and a devastated Mr Mason.

Sudden and tragic death wasn’t confined to France. On the 3rd April Mr Mason writes “Sorry to report that Levi Hill (St IV) was killed by Express yesterday at the level crossing.”  The railway level crossing was a popular place for local children to play. It was a busy place with a number of lines accommodating slow moving freight and coal trains as well as the express passenger services. Mason reports that money is raised for a wreath and “something useful in the way of attire for his elder brother (Rich Hill) in St V.” Levi’s funeral is held on the 5th April. Mr Mason doesn’t mention the event or the family again.

We feel we were incredibly lucky to ‘meet’ Charles Mason through the Grassmoor log-book and to be shown in to his world. School log-books are clearly a fabulous resource for historical research, full of everyday detail and insight, but we’re not sure all of them will reveal vivid and engaging characters like Mr Mason.