This project, exploring how food shortages during WW1 affected food availability in Arundel, West Sussex, is aimed at bringing people face-to-face with some of the lesser known facts on food and food availability during the First World War and how housewives and farmers back home could contribute. Run by the Arundel Museum the project looks at the impact of the First World War on Arundel and its environs, the communities left behind during the conflict and focuses on Food and Food Production. 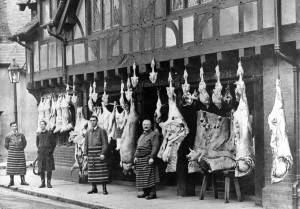 Arundel is a small market town in rural West Sussex with at its heart Arundel Castle, owned by the Duke’s of Norfolk, and with the river Arun running through it. What were the especial impacts on this town with its close relationship with Arundel Castle, the river and fishing and tenant farmers.

The research group formed of museum volunteers asks questions such as how this impacted on the people of Arundel? How were tenant farmers locally affected by conscription and the call to produce more arable and root crops? Did the pressure of food shortage divide or bring together the community? How did people respond through growing their own food?

The project will follow through the changes over time of attitudes to food from the first panic of war, reactions to hoarding and profiteering and a local sense of fairness, cooperation of local businesses during the conscription of shopkeepers and farm labour.

The project will work closely with the Arundel Castle Archives working with them to draw a picture of the relationship between the castle and the town at this time. Including the records of how farmers and government negotiated the conflicting demands of wartime locally can be followed and how the farmers dealt with the great changes which food production during the war brought about.

The main outputs will be local community events, to illustrate the findings of research including the Trench Cake in the Produce section of the local Arundel Flower and Produce Show , a food tasting and cooking demonstrations and a ‘Food Then and Now’ market and exhibition during 2016.

Results will also form the basis of talks both at the museum and with local groups including the local schools and the production of information booklets.

Our team of seven volunteers have been researching using sources identified at the beginning of the project through contacts including Dr Julie Moore from the University of Hertfordshire who pointed us in the right direction. Other sources such as Kelly’s directories, cropped up along the way.
The subjects we have focused on have been:

The most rewarding source thus far has been the Arundel Castle Archives, who have been very helpful, where we found records of the inspection and recommendation reports for the ploughing up of pasture for the planting of crops and records on the changes of fishing rights in the river during the war along with records of local shops used during the war period.

Sadly one source that would have been very useful, the Town Council archives had lost all their records in a fire in the 1980s. We have also failed to come up with any local recipe records from the time although we do have general books and magazines from the time with recipes.

We are currently focusing on the local newspaper archives and West Sussex Public Records Office and are looking forward to some exciting finds.

We have given ourselves until March to complete the research. Then we will carry out workshops to review what we have found and decide how we will present and share it.

If you would like more information or to be involved please contact Rita Godfrey via email ritagodfrey@rgunlimited.f9.co.uk