Cartoons and cartoonists played a vital role in Britain and on the front line during the First World War. They boosted morale, served the requirements of propaganda, and contributed to British culture and identity throughout the period. Despite the importance of these factors, however, their contribution to the Great War remains an underdeveloped avenue of scholarly research.

With the arguable exception of Cyril Bird, who drew for Punch under the pen name Fougasse, and the international reputation of Louis Raemaekers’ anti-German propaganda cartoons, few cartoonists of the era are remembered today. This gap in scholarship has begun to be addressed by the recent publication of a monograph entitled Comics and the World Wars: A Cultural Record (Chapman et al, 2015). This publication highlights the wartime contribution made by the British cartoonist W.K. Haselden, known as the Grandfather of the British newspaper comic-strip, and his illustrations in The Daily Mirror. The monograph also analyses in detail the role of amateur, soldier created illustrations published in front line British and Dominion trench journals. 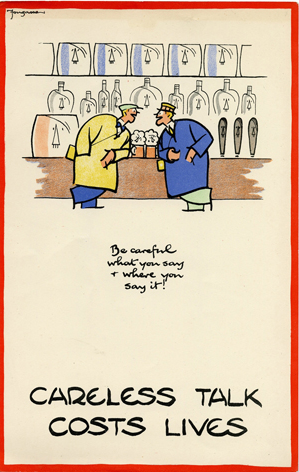 Cyril Bird (Fougasse) is probably best known for his ‘Careless Talk Costs Lives’ series of Second World War posters. He began his career as a cartoonist for Punch in 1916.

But what about amateur cartoonists on the British home front? In short, almost nothing is currently known. However, with the help of community groups, archivists and individuals this underprivileged aspect of British history is beginning to be addressed and has already opened up a number of intriguing avenues of inquiry. 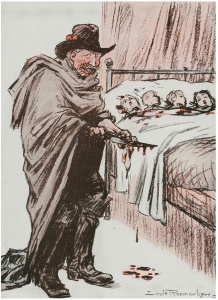 Louis Raemaekers illustrated many anti-German propaganda images during the First World War that were distributed across the world. This image shows Kaiser Wilhelm II slaughtering children in their sleep.

This project aims to find out more about the topic by cross-referencing these unusual, illustrated artefacts with other underprivileged, primary sources such as the poetry and narrative accounts of the experiences of individuals on the Home Front across the United Kingdom.
Community groups across the nation are invited to explore and contribute to this rich vein of British cultural heritage. Are there parts of this forgotten history of cartoons awaiting discovery in your local County Record Office or Archive? Were there any amateur illustrations contributed to local or parish newspapers that today are held in your local library? Do you know of an amateur home front artist of the period? Is there a First World War picture-story waiting to be told hiding somewhere in your attic amongst your Great Grandmother’s watercolours?
Please be advised to always check with County Records Offices or Archives, Libraries and other holders of archive material before travelling or contact the Everyday Lives Centre for further advice. 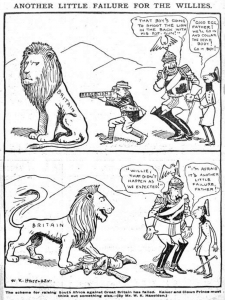 W.K. Haselden is considered the Grandfather of the British newspaper comic strip. Here he has illustrated some unfortunate adventures for his most famous creations, Big and Little Willie, representing Kaiser Wilhelm II and his son.