department of the University of Hertfordshire. As a scout himself he was interested in pursuing the story of scouts in the First World War. He searched sources online and together with a member of the Centre visited Hertfordshire Archives and Local Studies to explore the local newspapers. He is continuing to be involved in Centre activities and will  be contributing a short ‘digital postcard’ on what he found out about the work of scouts in the war in the next few weeks . What follows is his report on what caught his eye during his research.

‘a scout never grumbles, no matter what hardships he has to endure’

I have been doing work experience in the history department within Hertfordshire University. I have sat in on a couple lectures/seminars; I have done plenty of research on WW1’s home front, women’s rights and (what I’m focusing on in this article) the scouts. From the standard stereotype we all hold in our minds of the scouts fund-raising and camping, to something much bigger, the scouts who held a place in society, some even remembered as heroes from the war, saving and helping lives. Although the names may be lost to us, at the time in their communities they were known and they still live on through the Hertfordshire archives, which is where I sit as I begin to type this. I will follow through 1916 to 1918, to try and give you a picture of who these people, some even children, were during the Great War.

I will begin by saying that the scouts were well known, even in this dark period of time when

countries were at one another’s throats, I know this from how many references they are given across the newspapers, in particular the Hertford Mercury for our area in this year.

For example on the 2nd of September a small advertisement was put out for “Alleyne’s grammar school” in Stevenage. They gave several selling points such as the large sports facilities and excellent teaching, however they closed the advertisement by proudly stating they were connected to a Boy Scout troop.

Earlier on in the year on January 8th we also find that the scouts were considered minor political figures, we hear of a meeting/church service. We are given names of the people attending, then we are told “accompanying the mayor were the Boy Scouts”. However it’s not just community work they were putting out, there was also a lot of work towards the war. On the same day of January 8th the sea scouts were helping soldiers however they could, doing whatever they could. Helping with farming, carrying things to and from where they needed to be and other such small tasks that were (and still are) hard work.

The bravery of a scout is another thing we hear much of (more examples in 1917). On the 26th of February, for all their hard work with contributing to the war efforts on the home front, 5 scouts were awarded prizes. One was given a medal and a watch chain, the other four each given pocket knifes. Not only is bravery a running theme within the scouts but kindness and charitable acts to. On the 8th of July girl guides and boy scouts all raised money for hospitals to treat those harmed in the war, as well as orphanages for those who lost their families because of the war.

Nobody could argue with their causes and who they were, there must have been a huge amount 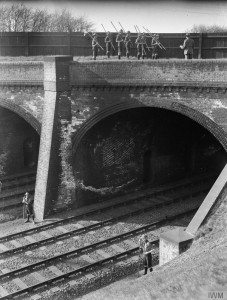 of appeal to all this hard work as on March 4th, four ambulance badges and 20 one year badges were handed out to the “Buntingford troop” of scouts. If the first year is the hardest, then who says they won’t all be getting their second year badges in no time.

In 1917 I could find quite a few more examples of the scouts across many more different newspaper, showing they weren’t slowing in growth. The Daily Mirror even commented on the 28th of august that scouting was one of the biggest educational movements ever and it teaches young boys how to apply themselves to any task given.

Earlier on I mentioned about bravery and heroism of a scout and one of the best examples I can give in this year is about a column published in the Birmingham Gazette on the 12th of March about a scout master being given a scout ambulance outfit for his heroic attempt at saving a child’s life when their clothes caught fire soon engulfing them. He managed to extinguish the flames and get the boy to hospital. Despite his best efforts however the boy did die from the severe injuries he inherited from the burning flames.

In the Daily Mail on 27th October an article was even published showing scouts paying their respects to the British Navy by creating a tribute to them in honour of their sacrifices to keep our country safe.

Despite the large movement of the scouts, it still wasn’t enough (apparently) when it came to larger district events. The Biggleswade Chronicle published a short article on the 15th of June trying to get more troops in the Hertfordshire district involved in a charity parade. However with such newspapers as “Sussex Cultural Express”, “The Daily Mail”, “The Daily Mirror” and even the “Biggleswade Chronicle” itself publish entire stories, articles and other such things each week about the scouts/sea scouts, scout of the week and general news of what they were up too, I doubt this was necessary.

Nearing the end of the War there was a lot of interesting points made by papers about the scouts. There were awards; there was information written by a scout who had shadowed a coast guard and there was even a story in early July about how a missing man was found by a group of scouts.

The Hertfordshire Mercury published a short article on the sea scouts on April 20th. It talks to us about the patrols leader (Eric Knight) who was a member of the old 1st Hertford Troop of boy scouts. The story is his account of the work the sea scouts performed and how he joined as he wanted to show his support and do his bit for king and country. This shows us the motivation, the movement of scouts instils in people, that people feel joining this group of people is not only fun but actually does a service to the country. Eric Knight even says “a scout never grumbles, no matter what hardships he has to endure”. I think it’s amazing that through everything these people stuck together and would get on with whatever given.