Children of the Great War 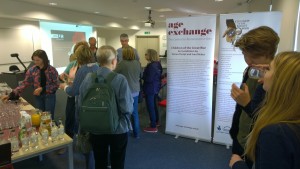 During 2013-14 Age Exchange ran a series of open days in London at which members of the public were invited to bring in family artefacts from the First World War, and talk about their significance in their family’s history. The interviews and objects were digitally recorded, resulting in a film called ‘Children of the Great War’ which our Centre hosted at Essex last Monday. There was a good turnout of around 40 people, a mixture of local historians, academics, and families.

The film was shown on a wide screen, with two images that ran simultaneously: one in colour, showing war landscapes and photos of war memorabilia, the other in grainy black-and-while featuring stills and video footage of the interviewees. The black and white images encourage a mood of reflection about the stories being told, and the combination of faces and interviewee makes you think about the connections between family stories and the wider historical context. Each story lasts between 5 to 10 minutes, and the transition between frames is slow, with blank white space between segments, which again encourages contemplation.

The film features global as well as British legacies of the war. It begins with the descendant of an Afro-Caribbean soldier, who holds in the palm of her hand a small and crumpled image of her father taken from a locket. Another interviewee was the descendant of a Jewish German soldier who had served in the First World War and who hoped his service medals – shown in the film – would save him from being rounded up by the Nazis. Although the family managed to pay off officials and get their father released from concentration camp, escaping to Britain in 1938, his father suffered many breakdowns afterwards.

Some of the cameos shed a different light on events well-known to historians, such as the interviewee whose father was among one of the parties formed in 1920 to exhume bodies on the Western Front, one of which became the Unknown Soldier and was buried at Westminster Abbey. The film makes you ask questions about the relation between the memories of eyewitnesses and the ‘remembrance’ of later generations. How much of the eyewitness experience is reflected in these accounts? How might they have been revised over time, and why?

The film portrays the different ways in which war memories could be transmitted between parents and children. One story concerns a man who, by sheer chance, found his uncle’s grave whilst taking part in an amateur car rally when one of the vehicles broke down outside a war cemetery. There’s an element of the uncanny as he relates how his mother had visited the same grave in 1927 whilst pregnant with the interviewee, but became very upset and had never returned. This was a kind of pre-natal haunting, a return that preceded the son’s conscious memory. In another delightful cameo, a man who learned Morse code during his own military service in WW2 relates how he and his father, who had also been in Signals, would tap out affectionate phrases to each other, and he repeats them on camera. Military code was adapted to express intimate feelings, feelings that may perhaps, among this rather reserved generation, have been harder to express in ordinary speech.

Hatred of the Germans is often mentioned as a legacy of the war among those I have interviewed, but the film shows another point of view here too, with a son relating how when his father’s Anglian Regiment were in the front line, they had a tacit ceasefire with a Saxon Regiment in the opposing trenches. Such cases of ‘live and let live’ were not unknown on the Western Front, and it was interesting to see how the peaceable attitude could pass down the generations, as the son had subsequently become a pacifist. During this segment the film moved back and forth between images of father and son, the visual morphing representing the cross-generational legacy of rejecting enmity. 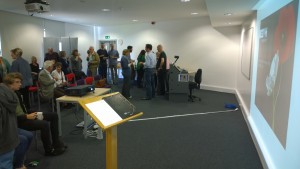 In the discussion afterwards, the audience reflected on the ways in which memories of the First World War are made and re-made as they travel down the generations, but how, nonetheless, they can furnish new insights about the war and its longer-term impact. The event made me think anew about the ways in which ‘private’ stories like these, passed down over the course of a century have helped shape contemporary public understandings of the Great War in Britain.