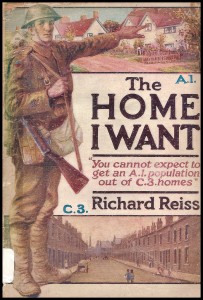 Although children growing up in Britain in the 1920s and 30s had no personal experience of the First World War, they were surrounded by its legacies in play, at school, and above all at home. This was a generation born in the aftermath, and many had fathers who were returned soldiers: young, unmarried men formed the mainstay of the British Army, and many of them went on to marry and establish families after the conflict’s end. Marriage was thought to be beneficial for returning soldiers, providing a source of emotional stability, and organisations representing disabled veterans encouraged women to take these men as husbands. Marriage rates between the wars were at an all-time high, with 41% of the population between the ages of 15 and 39 being married.

At the end of the war recruits were promised a better home life as one of the rewards of service. The significance of home for the returning soldier is portrayed in the cover image of Richard Reiss’ 1918 book. Reiss, a pioneer of Welwyn Garden City, had served in Gallipoli and Egypt during the war.

The first council housing schemes began to take shape as part of reconstruction, but plans were affected by the economic downturns of the 1920s and the Great Depression, and in 1939 around a third of the working-class still lived in slum housing. However, between the wars almost 2.9 million new homes were built for private ownership. In the wake of the war emerged the suburban husband and father, commuting to work by day, and by evening a companion to his wife and playmate to his children. Home hobbies such as DIY, gardening, cross-word puzzles, and listening to the radio became popular home pursuits.

Children’s experiences of home life between the wars varied widely. For some in the South-East, cheap credit and rising real incomes made affordable a semi-detached house with piped hot water and indoor bathroom and toilet. But home life was less comfortable for many growing up in the northern industrial towns and cities, and mass unemployment from the late 1920s led to large scale migration. Doris Perley described a reunion with her father that might well have been in the First or Second War:

The cause of this separation was economic. Along with a million others of working age, Doris’s father had moved down South for work in the early 1930s, the returned soldier separated from his family for a second time.

The focus on housing in public debate, and the embracing of marriage and domesticity, were in part reactions to the dislocation and loss of the war. These emotional aspects of legacy were closely observed by children growing up between the wars, whose own mothers and fathers had often experienced bereavement and the stresses of trench warfare. The turmoil felt by parents could be communicated in turn to their children, as memoirs of growing up between the wars attest. In Under My Skin the feminist and author Doris Lessing, born in 1919, writes ‘I used to feel there was something like a dark grey cloud, like poison gas, over my early childhood. Later I found people who had the same experience. Perhaps it was from that war that I first felt the struggling panicky need to escape, with a nervous aversion to where I have just stood, as if something there might blow up or drag me down by the heel.’ 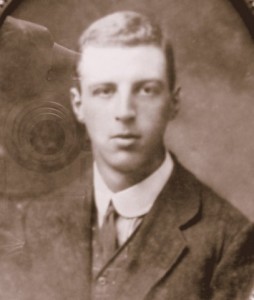 War wounds were one of the most obvious signs of the war, and were common among veterans due to the splintering effect of shell-fire. A father might have a hollow in his shoulder, arm or leg from a chunk of shrapnel. From time to time, fragments under the skin would work their way to the surface, to the horrified fascination of daughters and sons. Some wounds were more serious and often grew worse with age. Doris Lessing’s father lost a leg and had chronic health problems. He was one of some three-quarters of a million permanently disabled British soldiers. Their problems were often emotional as well as physical: even twenty years after the conflict, 35,000 pensions were being paid to ex-servicemen with mental disabilities. Growing up, children encountered men who were a bit strange, with odd gaits or nervous tics. In his memoir More About Boy, the children’s author Roald Dahl recalled that his teacher, Captain Hardcastle,

was never still. His orange head twitched and jerked perpetually from side to side in the most alarming fashion, and each twitch was accompanied by a little grunt that came out of the nostrils.

….. Rumour had it that the constant twitching and jerking and snorting was caused by something called shell-shock, but we were not quite sure what that was. We took it to mean that an explosive object had gone off very close to him with such an enormous bang that it had made him jump high in the air and he hadn’t stopped jumping since.

Reminders of the war such as these didn’t necessarily unnerve children – they were part of everyday life. The children of disabled fathers were affected as much by financial as emotional stresses. War pensions were comparatively generous by the standards of the time, but the level of benefits depended on the Pension Board’s assessment of a man’s injury. Children remembered the anxiety induced in fathers and mothers by the annual visit to the Pensions Board. Some men had war injuries that they did not claim for, or were not deemed by the Pensions Boards to have been caused by the war. Others were not in a fit state to claim. Brian Mullarkey described how, in the late 1920s, his father

very quickly changed from being, you know, quite smart and clean to… he completely neglected himself in terms of his clothing.  He wouldn’t let anybody do anything for him, he got a hole in his trousers kneecap, which he wouldn’t let Mother mend, he got a piece of string and tied round it.  And who can say what was going through his mind. .. In thunderstorms it was terrible, with the noise, he’d shake. He said nothing, but shook.  And he wouldn’t sit at the table with us, he sat in the kitchen on his own, and all the time in the house was spent virtually in the kitchen…. Who knows, again, what was going on in his mind. 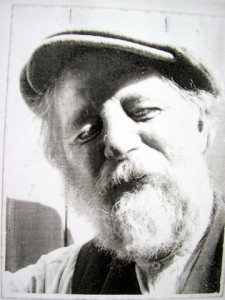 As his father did not receive a war pension, Mullarkey’s family relied on his work pension and whatever money their mother could make. Financial stresses also affected families where fathers had died of war wounds or war-related health conditions. Although women had been encouraged to marry disabled soldiers, the pension did not continue after his death if the disability was known about prior to marriage. The children in such situations experienced the effects of financial shortage, and remain angry.

The children of disabled soldiers experienced the war’s legacies in a particularly direct way. They might be required to help out from a young age with the care of ill fathers, and financial worries meant that some – especially daughters – might have to leave school and find work rather than stay on.

In the families of disabled soldiers, the stresses affected mothers as much as fathers. Doris Lessing’s mother suffered a breakdown whilst she was caring for her father, and a report on the wives of disabled soldiers at the Warseal Mansions in South London suggested that they had a shorter than average life expectancy due to the stresses of care. When men were too ill to work, mothers became the breadwinners.

The lives of many mothers had been changed by the war. Some had lost brothers or sweethearts before marriage, but at the same time, the upheavals of war provided new experiences of work and independence. For the children of VADs or nurses, or women working behind the lines in canteens, the stresses of care could be mixed with a sense of excitement in acquiring a profession, and adventure in being stationed abroad. Having worked and contributed to the war effort could sharpen these women’s sense of what they wanted for their own children. Some interviewees recalled that their mothers spoke more about the war than their fathers. For a daughter, a mother who had worked could be a source of encouragement. The larger economic picture is significant here, as young women’s employment increased markedly between the wars, particularly in the South-East and the consumer industries that serviced the house-building boom. There might be a ‘hidden influence’ behind young women’s pursuit of employment in the 1930s, and their war service during the Second War, in the form of women war-workers turned mothers and home-makers between the wars.

Although parents bore many legacies of the First World War, it was little talked about at home. Today, the children of the war generation find it odd that their parents rarely mentioned the war, and odd too that they never asked questions. This does not necessarily mean that across Britain there were hidden traumas were that parents were struggling to keep to themselves. In general the post-war attitude was forward-looking, and as the 30s progressed, attention increasingly turned to the prospect of another war. Emotional codes today are rather different. We tend to regard silence as psychologically damaging, and in a confessional culture, silence has less value as a personal trait than it did in the mid-twentieth century. Between the wars, however, parents concentrated on making a secure and comfortable a home life, and concern for their children’s future was itself a means of putting the past behind.

Children, family life and welfare between the wars

Michal Shapira, The War Inside. Psychoanalysis, Total War, and the Making of the Democratic Self in Postwar Britain (Cambridge: Cambridge University Press, 2013).