The Supernatural and the First World War

The interest in spiritualism during the First World War has been noted in many books. The support of the likes of Arthur Conan Doyle and the famed physicist Oliver Lodge, both of whom lost sons in the trenches, ensured that spiritualism attracted considerable interest at the time. By 1914 spiritualism was a religion with its own churches as well as a practice in terms of mediumistic séances. Yet, relatively little research has been done on the archives held by spiritualist churches. Gerald O’Hara’s work on the York Spiritualist Society suggests that the interest in spiritualism did not necessarily lead to significant increases in membership to spiritualist organisations. Between 1899 and1909 the York Spiritualist Society had a total of 357 members, but only 137 between 1914 and 1918. What we see in the war years is an increase in the resort to mediums by people who would not normally have gone to them. 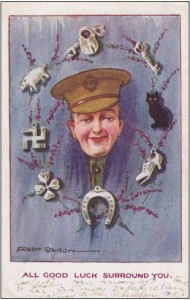 The War also created a boom in fortune-tellers as anxious relatives sought to hear if their loved ones would survive the trenches. There were concerns about the effect fortune-tellers were having on public morale, and many of them were arrested. At the trial of Madame Charles in 1916 it was heard how she informed one client, whose husband had just returned from service in Egypt and was shortly leaving for France, that ‘he would never return to her’. Moving from the personal to the national, numerous old and new prophecies, such as those of Nostradamus, were printed that seemed to confirm the inevitable victory of one side against the other.

Some voices in the established churches were convinced that the War induced new instances of miraculous and providential occurrences, such as the Angel of Mons. In the Spring of 1915 reports spread in the British press that a ghostly force of medieval British archers had appeared on the battlefield to support the British Expeditionary Force as they retreated from Mons in late August 1914. The numerous reports of pocket Bibles stopping bullets or shrapnel further fed the notion of divine intervention. Several examples are on display in museums, but it would interesting to see how many more examples remain in private hands, passed down as valuable family objects. 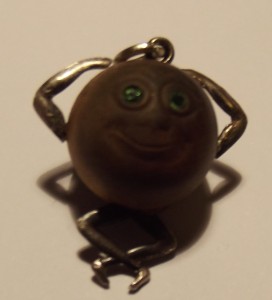 As well as the protection provided by religious faith, the war saw a vibrant trade in secular, protective amulets. Good luck postcards depicting black cats, four-leaved clovers, and horseshoes were very popular. Several little trinkets or mascots became sensations. In Britain, the most popular during the first half of the War was ‘touchwud’. With its smiling wooden face and crossed legs, it was advertised as the ‘mysterious little eastern mascot that brings you good luck!’ On the 14 August 1915, the French actor and singer Alice Delysia, a big star in the West End, presented 1,200 Touchwoods to the officers and men of the Sixth Battalion of the City of London Rifles in Regent’s Park. Pathé news was there to film the event.

The second half of the War saw the rise of the little god ‘Fums Up’. It had a wooden head to touch for luck, cupid’s wings on its heels to speed true love, and moveable arms to make the thumbs up sign.  Advertisements for it were accompanied by a jingle, which ran:

So, there is much to explore and research with regard to the numerous ways in which the Great War was also a Supernatural War.