Conscientious Objection Remembered with National Lottery grant.  Launched on 1 December 2017 outside the Salisbury Hotel, Green Lanes N4 (the spot where anti-war protests were held 100 years ago). 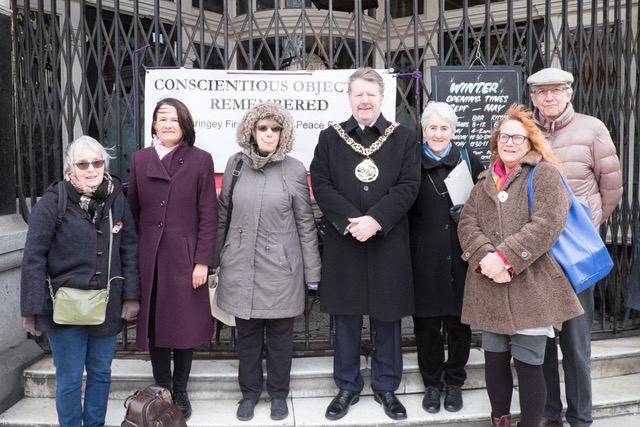 ‘If you didn’t face the death penalty then you faced… a lifelong stigma against people who lost their jobs, people were sent to prison – so they truly were brave people…  I’m really proud to say, as Mayor of Haringey, part of our history is that they are going to be acknowledged and I know that there’s going to be a lasting memorial here.  So it gives me great pleasure to be amongst you to honour these people and to honour the work of this group.’

The Heritage Lottery Fund (HLF) has awarded £9,900 to the ‘Conscientious Objection Remembered’ project which will include a programme of events from February 2017 to May 2019 and the installation of a commemorative plaque outside the Salisbury public house in Green Lanes, Harringay. 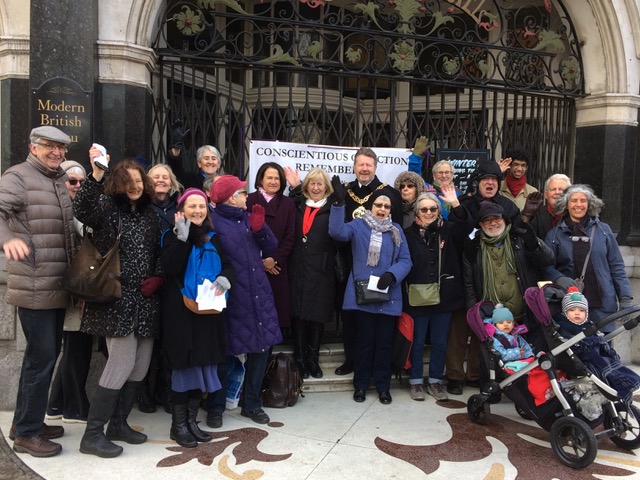 CATHERINE WEST MP referred to the activities which the group will be organising to share the fascinating story of the conscientious objectors – and the possible reasons why there was such a high density of COs in this part of north London compared to most of the country.

‘I look forward to having that living memorial here and also to having regular events when we celebrate our own history. We don’t quite know why this was such a hotspot for peaceful people but it certainly has a long tradition going back certainly in the labour movement.’

Go to the Conscientious Objection Remembered website at: www.conscientiousobjectionremembered.wordpress.com