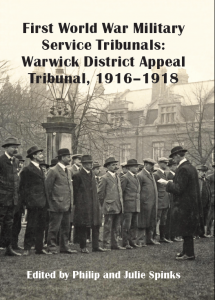 In 2014 Phil Spinks contributed a fascinating article to our website on the research that he and his wife, Julie, were undertaking to uncover the stories of the men who appeared before the Warwick District Appeal Tribunal during the First World War. The tribunal records had escaped the general destruction ordered by the government at the end of the war, and offered a fascinating insight into the social and economic life of one midland community.

The results of their painstaking work can now be found in a new book First World War Military Service Tribunals: Warwick District Appeal Tribunal 1916-18, published by the Dugdale Society. An excellent introduction sets the cases that follow into the context of a county seeking to balance the very different demands of individuals, small businesses, larger companies and the military. Here can be found details of farm labourers, bakers, grocers, insurance agents, and clerks as well as others such as a gasworks manager, a cabbie and an upholsterer, coffin trimmer and blind maker to highlight just a few. Each case helps to add to our understanding of how the war impacted on the lives of men and women of whom we might not normally hear, and builds a picture of the economic and social world in which they moved.