Centre for Everyday Lives in War. 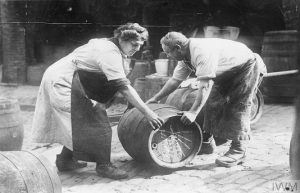 When war was declared it was decided that Britain should as far as possible continue to follow the economic philosophy of Herbert Asquith’s Liberal government and its doctrines of free trade. People could contribute to the country’s war effort by ‘carrying on’ as normal – or at least as far as possible.

The catchphrase ‘business as usual’, generally attributed to David Lloyd George when he was Chancellor of the Exchequer, was also used a good deal. He supposedly coined it in August 1914 in a speech to business leaders as a part of a plan to reduce the effect of the war on the economy. The big shopkeepers took up the slogan, as did manufacturers and representatives of industry.

This one-day event seeks to investigate how businesses – big and small – national or local – did manage to carry on “as usual” – or whether they were forced to radically change their way of doing things during the war. We want to explore some of the following questions:

Expressions of interest to the Centre for Everyday Lives at War by 14th September  2017.  Please email: firstworldwar@herts.ac.uk

Also part of the day will be a semi-staged performance of two short 1-act plays dealing with these topics: Howard and Son (1916) and Harold Brighouse’s satire Once a Hero (1921)

The event is free.

For further details or to book your place, please email:  firstworldwar@herts.ac.uk.  A more detailed programme will be made available closer to the event date.