‘German and British descendants share heritage from the Great War’ is a collaborative project to record and share family memories of the First World War. Led by London’s reminiscence organisation Age Exchange, who will work alongside Rachel Duffett and Mike Roper from the Hertfordshire Engagement Centre, the project compares the war’s impact on family histories in each country, from the inter-war years through to the present and the participants’ experiences of remembrance and commemoration today. British and German elders will record and then share their First World War family histories at a four day event in April 2016. The exchange will be filmed and family archive material will be digitised. A film documentary sharing the story of the project will be screened at media, heritage and community venues in London from July 2016, and made available on-line. Materials from the exchange will also be used to create Smart Phone learning materials for schools. Students will share their resulting learning and interpretation at ‘Meeting in No Man’s Land’ Open Days. All recorded and digitised material from the project will go on-line and the project archive will be given to the First World War Engagement Centre (Herts) to support future research.

Age Exchange, the lead partner in the project, has established contacts with German partners and has obtained HLF funding. Duffett and Roper will help to refine the approach to the interviews and collection of family heritage, and their knowledge of the interwar legacies in each country will provide a broader context for the stories that emerge. They will benefit from the collaboration with German experts in intergenerational therapies, and the experience of comparative research will sharpen their understanding of what is distinctive about British family legacies of the conflict.
The project gives us a unique opportunity to reflect on WW1 heritage making in the centenary. Age Exchange is a world-leader in reminiscence activities, with a long history of community-led oral history activities which seek to challenge and transform understandings of history. We will observe ‘live’ what a community organisation like Age Exchange contributes to contemporary debates about the memory of the First World War, and assess the changes in understandings and historical consciousness it sets in train. We will keep a blog throughout recording our impressions, which will be posted on the Herts Centre website. Watch this space!
Mike Roper

Mike and I are just back from Rosenheim, Bavaria and a meeting with German colleagues which was in equal parts exciting, eye-opening and thought-provoking. The distribution wasn’t quite equal as a final few per cent need to be reserved for the ‘this is wonderful, but can we pull it off?’ category, but then all the best projects have that challenging element and the energy, enthusiasm and commitment in the meeting room all point to it being a huge success.

The project that Age Exchange, led by its artistic director David Savill, has developed with Elfriede Pauli is about the way in which the events and memories of the First World War are held within families and how we might identify and explore those differences and similarities across national boundaries. A group of elders from the UK will travel to Germany in April to meet a similar group in Bavaria where the exchange will be filmed and this footage will be used, with the individual interviews given by the participants, to make a feature length documentary film. The process will focus on the ‘children’s’ experience, on the stories shared or passed down to them by parents or grandparents and the significance of those stories within their families, how they’ve been reinterpreted and shared. 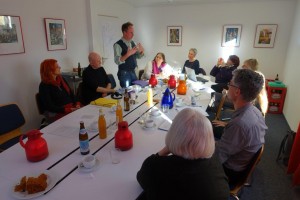 Age Exchange ran a hugely successful project ‘The Children of the Great War’ which collected legacy accounts across London and we had our own collection day at Essex University last year, but the international component is something new and brings its own particular challenges. One of the most striking, certainly to historians, is the difference between the First World War’s place at the forefront of British culture and its far less prominent position in Germany where the Second World War has to a great extent overwritten the earlier conflict. We discovered that there are practical reasons for the more hidden role of 1914-18 in that the destruction and population displacement of the second war meant that many German families just don’t have the memorabilia, the photographs, letters, medals and cap badges that have been handed down in their British counterparts: possessions were lost or destroyed and many of the memories went with them.

Discussions about how to devise a process for the meeting and the filming were lively. What happens when you put historians, film-makers, artists, psychoanalysts and psycho-social therapists altogether in the same room for two days? I now know the answer to that question and it’s intense debate accompanied by a great curiosity about colleagues’ ways of thinking and working, combined with a desire to understand those diverse motivating factors and a willingness to think flexibly about issues. It really was quite extraordinary that in amongst the differences we found so much common ground, a place where we could meet and share our hopes and ideas and come together to think of ways in which they can be realised that will provide all of us – and above all the elders – with a project that really succeeds.

We held our first planning meeting last week in Rosenheim, in the heart of Bavaria. It was a compelling couple of days one in which each worked hard to communicate ‘across the lines’ and bridge the differences in our backgrounds. There were of course, differences in language and personal and national histories of the world wars, but the participants were also coming from different professional backgrounds.
Along with David Savill, the creative director of Age Exchange, and the film maker Ivan Riches, our members included social workers who work with reminiscence therapy, a psychoanalyst, an artist, a language teacher and translator, and of course, the group’s resident historians, me and Rachel. We spent much of the first day in workshop mode, doing ice-breaker exercises, showing family artefacts related to the war, and talking about our personal interest in the project. From this we gained fascinating glimpses of the post-war cultures and family histories in the two countries. Amongst our German colleagues the legacies seemed difficult personally and politically. The shadow of the Second World War dominates the historical landscape and that makes it harder to recognise the personal aftermath of the First. Yet, in the family stories that the participants told, the impact of the earlier conflict was clear. In some cases the physical and psychological effects – of defeat, shortages, illnesses and war disabilities – could be traced right down to the present. One participant presented a cigar box, inside which was a medal awarded to her father in 1934 for his services during the First World War, along with a certificate signed by Hitler, a striking personal illustration of Hitler’s elevation of the veteran as an exemplary German citizen.
Day two was devoted to practicalities. This was where the differences between David and Ivan’s background in performance, and that of the academics, really began to stand out. For them, the key considerations are to make sure that the documentary film can be produced in time, and that sufficient material will be recorded. So they work back from the end result and the big deadlines: the filming of the different exchanges that are planned, and the sets of interviews with the German and British elders that will be held in advance of the meeting. By contrast, I was considering the next steps, thinking about how to select a sample of informants, and how to make sure that we could assimilate the ‘findings’ from each set of interviews before moving to the exchange between elders.

I was amazed at how quickly the process moved. At the end of Day 1 we sometimes seemed to be teetering on the edge of paralysis, with intractable issues about funding for the German participants, what kind of event each of us was imagining, and how to fit everyone’s wishes into our schedule. At the very end of the day it turned out that the rooms and accommodation we wanted were both unavailable. But come 10am the following day much of this was sorted out, as both sides had been up during the night working out solutions. There was an extraordinary sense of forward momentum, forced by the pressure of deadlines and the complex organisation the project requires. The nearest that most academics get to this kind of external pressure would be hosting a conference, but the logistical complexity of this meeting is daunting. Even taking the interviews alone, for example, there are many issues: should they all be done by Age Exchange with a translator, or should German and British organisers interview their compatriots? Should there be a professional translator, or do we do this informally between the group members? Should the translation take place ‘live’ to allow reciprocity, or will it largely happen after the interview? Despite the complexity, it was salutary to see how quickly logjams were surmounted.
There was a strong feeling of goodwill among all the participants and a will to make things work. In part, the planning meeting seemed to function as a kind of ‘pilot’ for the actual exchange between elders, and it was fascinating to see themes emerge that will no doubt surface again as the British and German elders tell their stories, and meet.

Age Exchange has produced a film of the event: