Our collection day was more successful than we could have hoped, with sixteen volunteers coming forward. Initial numbers had looked to be around twelve, but on the heels of a feature in the East Anglia Daily Times a week ago, a double-page spread on our research appeared in the Essex County Standard last Friday. This brought in a few more people, and one dropped in by chance after seeing the signs on campus. It was certainly busy. There were lots of logistical issues to sort out before the first interviews at 11. Taxis had to be ordered for those without transport, and we had to figure out how to get our volunteers, some of them elderly and not that mobile, up to the Sociology Department, on the 6th floor of a campus sited on stilts! We needed to transform our seminar rooms into interview spaces, figure out where and how to set up the digitising facilities, and create a waiting and refreshment area for the volunteers. In the end we decided to do the digitising in the breakout space, so people could meet and show their objects to each other while they waited for their interview and material to be photographed. 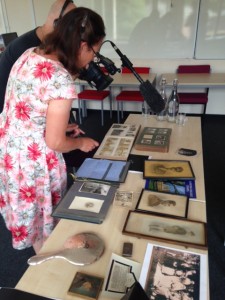 Having set up the rooms, just before the first appointment we held a briefing with the three interviewers, Tony, Malcolm and David. Our aim: to locate the First World War in the interviewee’s past, focusing on the objects they had brought with them and their significance in the family history, and their memories of the people associated with the object/s. David, Malcolm and Tony were allocated five hour-long slots each, while I took over at one stage in the morning when a queue formed. Simon did the digitising, while Ivan roamed around the interview and breakout spaces doing vox pops interviews. Emily and Thomas, our two helpers, directed people to the rooms, served refreshments, and chatted during the breaks. At points we had up to twenty people in the room, as many participants arrived with families, partners and friends.

People brought in an amazing variety of objects and we collected some remarkable stories. One interviewee had just a single artefact with him, a scanned image of his father and uncle in uniform; another brought in a crumpled letter that her returned soldier father had written to her when she was on holidays with her mother. Playful and affectionate, it presented a striking contrast to the supposed ‘stiff upper lip’ of the war generation. Many of us were intrigued by a brass dagger mounted in a picture frame that one man’s grandfather had crafted out of the fragment of shell that nearly hit him, which was accompanied by a recording from the 1970s in which his grand-father explained the back-story. 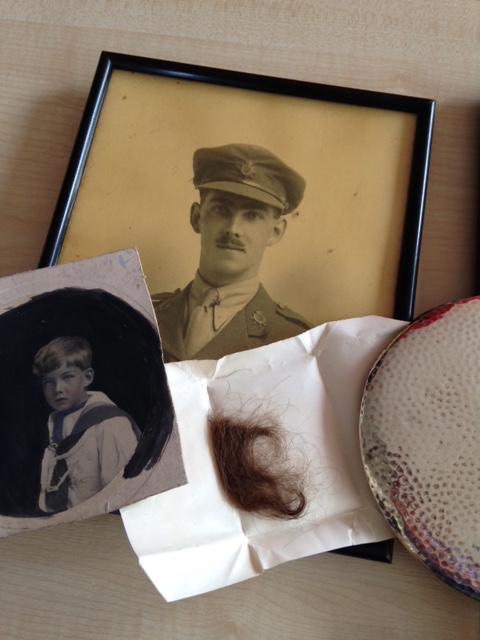 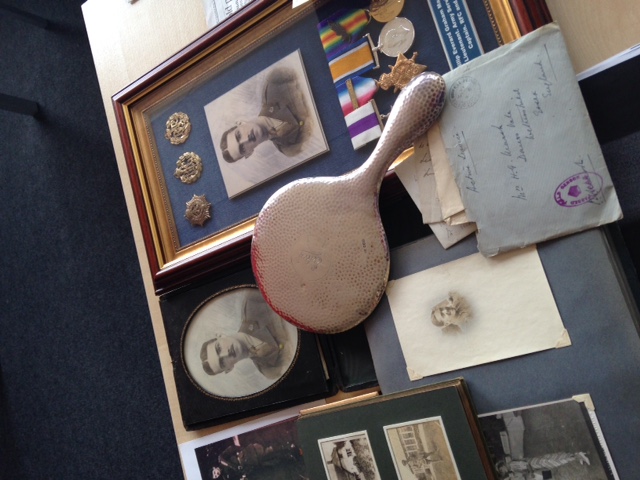 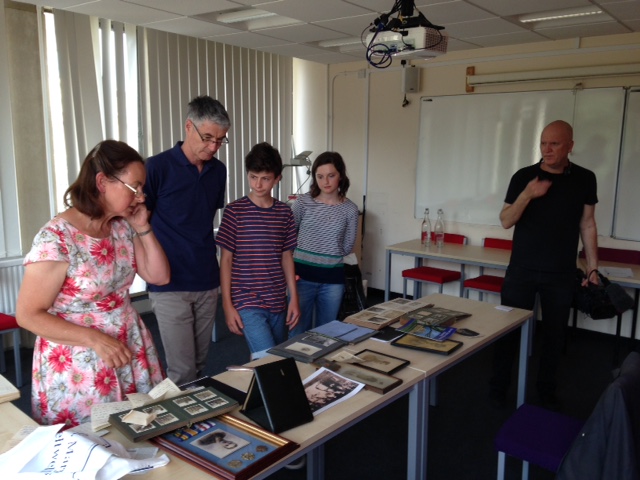 These were spare but intimate contributions, but others came in lugging shopping bags and suitcases – veritable mobile archives – from which they selected to tell their story. A man whose father had clocked up more than 500 hours flying time in airships brought in flying logs, diaries, a wonderful collection of photographs of airships in the process of construction, and copies of a service newspaper. The day finished with an interview with a woman whose grandmother had lost her husband whilst she pregnant. The grandmother had created a kind of memorial to both her husband and the daughter he had never known, documenting her early years in beautiful sketches, photos and diaries. These were just some of many highlights, and we now await the return of the interviews and images from Age Exchange, and their appearance on Europeana’s website.

In a day which was a first for us, there were inevitably some hold-ups as people waited for their interviews and for their objects to be imaged. But you will appreciate why once you know the amount of material we collected: over twelve hours of interviews, 352 digitalised images, and three hours of film! Everyone showed great patience (thanks Bob in particular!) and we are very grateful indeed to everyone for their contributions. The Age Exchange team worked without break from 9.30 until well after 6pm, rewarded only by a pint in the student bar at the day’s end – three cheers to them!