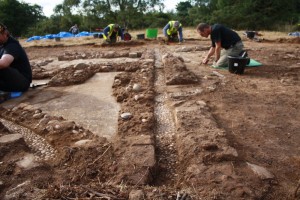 Volunteers at Cannock Chase led by No Man’s Land, the European Group for Great War Archaeology, recently excavated the only known Great War terrain model in the United Kingdom. Built by German prisoners of war and men from the 5th Battalion New Zealand Rifle Brigade on their return to HQ at Brocton army camp in Staffordshire in early 1918 the model shows the terrain around the Belgian town of Messines.

The Council for British Archaeology are undertaking a new initiative into exploring the impact of the First World War on the Home Front.

Although First World War battles took place elsewhere, preparations transformed our economy, society and landscape here at home. The Council for British Archaeology is working with English Heritage and partners across the UK to help local communities identify and map the remains of the First World War in Britain. Local people can help to document and preserve stories, and vulnerable remains, for future generations.

Running from 2014–2018, the Home Front Legacy project is supporting community groups researching local places associated with the Great War with an online toolkit and guidance for recording the remains of surviving sites, structures and buildings around Britain. This local knowledge  is presented on a UK-wide map of sites and projects, helping us to better understand the legacy of the War on our landscape and consciousness. The data is also submitted to the UK’s national and local archaeological records to inform planning decisions and help to safeguard First World War remains for generations to come.

A programme of workshops across the country is planned to support those wishing to explore their local community and the first of these takes place on Saturday 25th April at the Gunpowder Mills, Waltham Abbey in Essex. To book a place on this workshop or to find out more about this project visit the Home Front Legacy website.