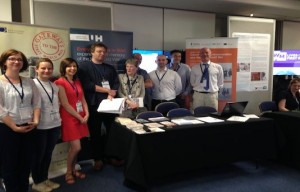 Members of the Everyday Lives in War centre recently joined the other four FWW Engagement Centres at the Connected Communities Festival in Cardiff.  It was a great opportunity for all five centres to connect and discuss future projects, and to get a glimpse of other community projects also funded by the Arts and Humanities Research Council.

Our Stand at the Festival

Over two days (1-2 July) at the Motorpoint Arena we had the opportunity to talk with members of the public and community groups also exhibiting at the festival. We particularly welcomed the opportunity to engage with school children who stopped by to hear more about the centres’ work.

In addition to our stand, the five centres also participated in a breakout session focussing on cultures of commemoration and performing the First World War.  This was a welcome opportunity to showcase some of the new projects under development, and to get feedback on the ways in which community groups would like us to work with them.

The session opened with our own Sarah Lloyd and Ian Grosvenor from the Voices of War and Peace Centre explaining the purpose of the five centres and the aim of our breakout session.  One of the key points emphasised was that the role of the First World War centres is to act as facilitators for community groups.

We heard from Jonathan Coope and Paul Elliott from the Centre for Hidden Histories about their Green Spaces Project, which in part considers the usage of parks in Nottingham during the First World War.

First up in the ‘Performing the First World War’ section was Brenda Winter-Palmer from the Centre for Living Legacies, 1914-18. She spoke of her own experience of researching her Uncle Willy’s involvement in the War, which added a personal dimension to the clip of The Medal in the Drawer we were shown.  This play was recently staged with an intimate audience under the direction of Dr Winter-Palmer. Moving away from the field of combat, Andrew Maunder (Everyday Lives in War) then showed a clip from J.M. Barrie’s play A Well-Remembered Voice, which was staged at the launch event for our centre.  The play centres on a father’s grief following the death of his son in the fighting.  To view footage of this section from the breakout session, click here.

The two days proved a useful exercise in helping the five centres think further about individual projects and cross-centre collaboration. We were also delighted to make some new contacts and receive ideas that we now look forward to considering further.