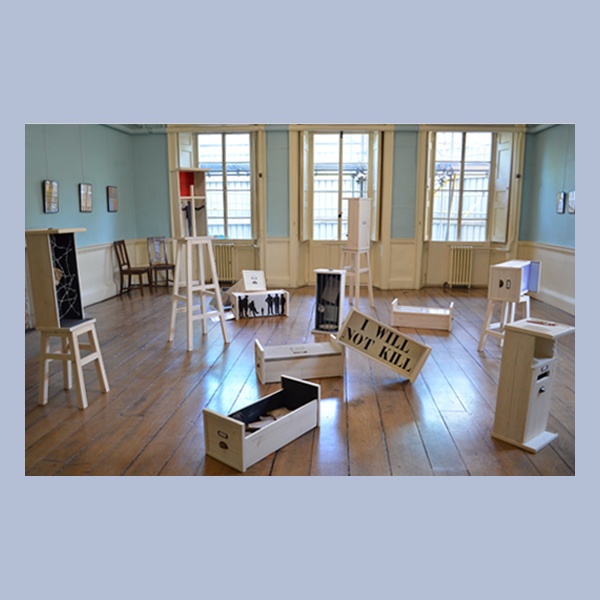 The Lost Files is an installation that explores the experience of individuals who for moral, religious or political reasons refused to participate in World War One. Conscientious objectors were vilified in their own time, some were initially sentenced to death, many thousands were imprisoned and many continued to be ostracized by society long after the war ended. There is scant information about the conscientious objectors, most of the official records were destroyed after the war, and many of the unofficial records have since been lost. The Lost Files seeks to redress this by creating a visual record of conscientious objection.

The installation utilises a variety of media: sculpture; found objects; sound; archive material and photographs. Framed on the walls are images representing the vast literature generated by the war resisters, to encourage, support and inform each other for the duration of the war and beyond, and a soundtrack brings to life the names and details of COs.

The Lost Files offers a response to the experience of conscientious objection and a glimpse into how it might have felt, at great personal risk, to stand against the conventions of society. It is also a homage to a group of brave and principled men and women.

See the installation from 25 April until 20 May

Al Johnson is a politically engaged sculptor and her work considers recent history and the interplay between politics, power and the collective memory. Al develops sculpture in thematic series and utilizes a range of materials: textiles, forged steel, wax, copper, and timber, creating works that are sensual, paradoxical and challenging.

NOTE The Crypt entrance is entirely separate from the Church, on the Nelson/Quay Street side of the building.