Children and the First World War

In 1915, the leading toy manufacturer Britains brought a new product to market. The ‘Exploding Trench’ was around 30cm long, made from wood and cardboard and painted muddy green; half a dozen toy soldiers were lined up in the cut and when the flag which stood at one end was struck – preferably with a missile from a toy cannon – it activated a mechanism which fired a cap and released a spring causing the soldiers to be thrown up into the air ‘in all directions’ as if by the force of an explosion. The line drawing in the advertisement demonstrates the ‘before and after’; the tiny figures catapulted upwards appear to be wearing pickelhaubes because no British child surely could have contemplated inflicting this upon anything other than the loathed German army. The label on the box stated ‘Very Interesting, No Danger’, while that may have been so – it was unlikely that the child could have been physically harmed by the toy – the public reception was at odds with the reassurances on the packaging and the product had to be withdrawn shortly afterwards. The interest that the object generated was deemed to be if not dangerous certainly undesirable. The ‘Exploding Trench’ crossed an invisible line between what it was acceptable for children to know of war and mimic in their play and what, because of its over-explicit referencing of the forms that warfare took on the Western Front, was not. The toy is potent evidence of the tensions between the traditional pleasures of childhood and the nation’s expectations of all her subjects at a time of total war. 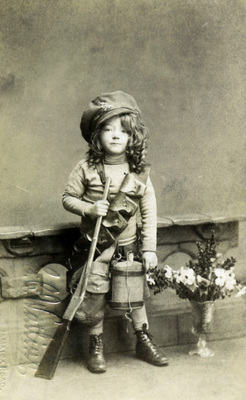 A photographic postcard showing a girl dressed as a British soldier photographed at a photographer’s studio in Bermondsey, London
Source: The Army Children Archive

Toys specifically designed to mimic the warfare of adults carried with them a range of concerns, but the writers of Games and Toys, the trade paper of the British Toy Industry felt no such ambivalence when they addressed, as they regularly did, the issue of encouraging boys to imitate war in the playroom; such toys they asserted in no way ‘constituted militarism’ but were an ‘honourable tradition’.[1] For them, the attraction was innate, and indicative of a long, playful history of miniature warriors and their established place in the nursery. It has been estimated that the annual output of toy soldiers was over ten million by 1914 and for Games and Toys, such games were a reassuring manifestation of latent masculinity in – as the December 1918 issue put it, those ‘little boys’ who might one day grow up to serve as the ‘bigger boys’ had in France: ‘The little painted warrior appeals to his inborn martial instinct, just as the doll appeals to the maternal side of the young girl’s nature’.[2] Boys and martial toys was an historic and culturally acceptable combination, but the association between girls and war was less easily accommodated

Researching the lives of children in the War

Of course, childhood is not just about toys and play, but children and the First World War is a relatively under-researched area amongst the wealth of material available on the conflict – Rosie Kennedy’s wonderful The Children’s War, 1914-1918 was published in 2014 and is the only detailed study available of the British experience. A key issue for researchers is the lack of unmediated sources: most of the material relating to children comes through the voices of adults. Reading school log books, for example, provides glimpses of the pupils’ activities: the ‘Blackberry Drives’; the collection of horse-chestnuts for the production of cordite; and the celebration of national ideals on Empire and Trafalgar Days, but unlike the French archives there do not appear to be collections of the pupil’s personal responses to events, no treasure trove of essays and drawings. Examination of other sources indicates that the war featured in classroom teaching given the publication of texts such as Why Britain Went to War – to the Boys and Girls of the British Empire by James Yoxall an MP and secretary of the National Union of Teachers in 1914, which delivered the message in terms that its audience would have understood: the nasty bullying habits of Germany needed to be curtailed by better, more principled nations who were morally straight and true. The children’s personal responses, however, are harder to locate.

In their spare time many children were engaged in active support of the war effort. The Boy Scouts in particular wore their uniform with pride and became increasingly involved in forming volunteer groups to act as messengers, coastguard lookouts and signallers. Service to the nation was not confined to boys and the Girl Guides also offered opportunities to their members to earn merit badges for their war-related efforts. In Girl Guide Badges and How to Win Them, alongside the Air Mechanics, Ambulance and Rifle Shot badges was a War Service award which could be achieved through undertaking at least one hundred hours volunteer work in a hospital or on an allotment. In addition, the Girl Guides offered the Nurse Cavell Badge for exceptional conduct: ‘either special pluck in saving life, self-sacrifice in work for others, endurance of suffering, or calmness in danger.’[3] Outside of these organisations many more children contributed to the war effort, a Pathé newsreel from 1917 entitled ‘Even Children Help’ shows a group of serious eleven and twelve year olds from Dunstable wielding hoes and shovels and while not in strict military formation, they appear to be an organised unit and there is a military quality to the way in which they bear their garden implements on their shoulders, reminiscent of soldiers and their rifles. Consciously or unconsciously, the children were not only serving the nation through their digging and hoeing but echoing the military service of the older generation. 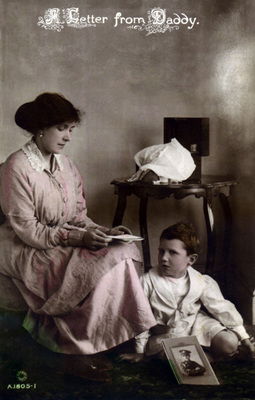 A British sentimental postcard. There is a handwritten message on the back that reads, ‘To Alice / for a happy Birthday / Love from Carrie’.
Source: The Army Children Archive

The war reached into children’s lives through a web of other associations. The stories of sacrifice permeated the literature they read, the films they saw, the advertising in their comics and the excursions they made. In 1915, the V & A Museum in Kensington decided that more needed to be done to entertain children during the war, and so at Christmas it set aside a room for a special exhibition. Throughout the school holidays, children came to visit an area that had been designed specifically for them – a new concept in the history of such institutions. It contained ‘various subjects dealing with, or connected with, war and fighting’, including models of Cromwell’s soldiers and objects from the Napoleonic Wars, which were aimed at boy visitors while the girls were offered a display of costumes from the past and an array of dolls.[4] A wider audience was reached through comics such as Chums, a boys’ magazine whose wartime issues were packed with stories that told of the active role of schoolboys in the conflict whether through the detection of German spies in their locality or by working directly for the war effort in the harvest.[5] But, whatever the reach of comics, books, museums, youth associations or school, the most significant way in which the war came home for children was through absence: the gaps that were left in their families as fathers, brothers and uncles were called up into military service. Children became prolific letter writers as well as readers and helped forge the connections between home and battle fronts that sustained the men, and of course for many, the war’s legacy would be experienced in the years after the Armistice in the void created by the loss of relatives and the long-lasting physical or mental damage suffered by the veterans and their families.

Games and Toys, the journal of the British toy industry

Hague, Eli, Streets Away from Paradise. Reminiscences of a Stalybridge Lad (Manchester, 1987)

Higonnet, Margaret, ‘Picturing Trauma in the Great War’ in E. Goodenough and A. Immel, (eds), Under Fire. Children in the Shadow of War (Detroit, 2008)

Paris, Michael. Over the Top. The Great War and Juvenile Literature in Britain (Westport, 2004)

Children of the Great War project