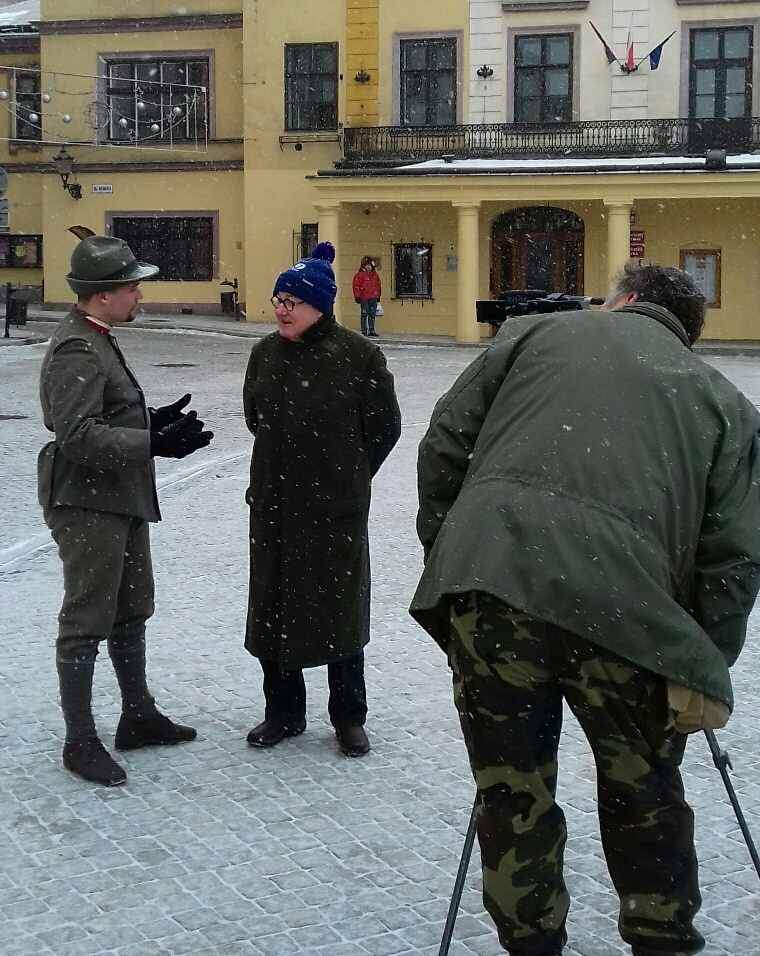 Jim Beach of the University of Northampton reflects on a visit to the Czech Republic.

Speaking neither Czech nor Polish, it was with some trepidation that I accepted an invitation to speak at a workshop on the Seven Days’ War between the Czechs and Poles in 1919.

The initial invite came from Tomáš Rusek, a Czech historian I had met at the Voices of the Home Fronts event organised by the National Archives and Everyday Lives in War in 2016.  Along with Ondřej Kolář, who had presented alongside Tomáš, a coincidence of historical interest emerged during that conference and the three of us have remained in contact since.

The workshop took place in Ostrava in the Czech Republic on Friday 25 January and was organised by Martin Lokaj of the city’s university in collaboration with the Association of Czechoslovak Legionnaires.  My paper discussed the British military officers sent in early 1919 to the Duchy of Teschen; now the borderlands of Poland and the Czech Republic.

Like my fellow Britons a hundred years ago, I was unsure what to expect but found the experience fascinating.  Particularly as my only personal point of comparison was First World War centenary events in Britain.

The visit was made all the more interesting because I travelled with Ian Dalziel, the great-nephew of one of the British officers sent to Teschen.  Like me, Ian had never visited the Czech Republic and we were made to feel most welcome by our hosts.

Another aspect that impressed us was the format and content of the workshop.  It took place in Centrum Pant, a coffee and bookshop which is used as a cultural venue in Ostrava.  This made the occasion less formal than a standard academic conference and seems to have helped the interchange of perspectives.

The audience was a mix of scholars and the wider public, with representation from both sides of the modern border.  It is also worth noting that the programme did not shy away from confronting difficult subject areas.  For example, one talk addressed the highly controversial issue of war crimes committed during the fighting.

Although handicapped by our linguistic ignorance, Ian and I witnessed vigorous debates in the Q&A sessions.  Catching up on the gist, which was kindly translated retrospectively for us during the breaks, I was struck by a similarity with British First World War-related events between 2014 and 2018.

As in Britain, there was an obvious collision between recent scholarship and ingrained perceptions of the conflict.  And although there was no obvious emergence of consensus, it struck me that it was important for old and new views to be expressed, challenged, and argued in a public historical forum like this one.

In this regard, it must be understood that a broader significance hangs over the Seven Days’ War.  It tainted the early relationship between a re-established Poland and the new state of Czechoslovakia.  As the interwar period played forward this had consequences when the Second World War loomed in Central Europe.

On the Saturday Ian and I joined the Legionnaires association on their visit to the battlefields of the Seven Days’ War in Poland.  With temperatures well below zero and an accompanying snow fall, we certainly got a feel for the meteorological challenges facing the two sides a hundred years ago.

The key events of the day’s tour were the laying of wreaths at graves of the fallen.  In simple ceremonies very similar to their British equivalents, a guard was formed by personnel from today’s Czech military and younger legion members wearing reproduction uniforms of 1919.

These uniforms were in themselves an intriguing insight into the conflict. Czech forces of the time wore a variety of dress depending on which army they had served with in 1918.  Czech legion units formerly with the French and Italian armies wore uniforms of those countries, while locally-recruited troops had Austro-Hungarian outfits.  The addition of insignia in the then Czech national colours of red and white did not really help with battlefield recognition because Polish colours were the same! 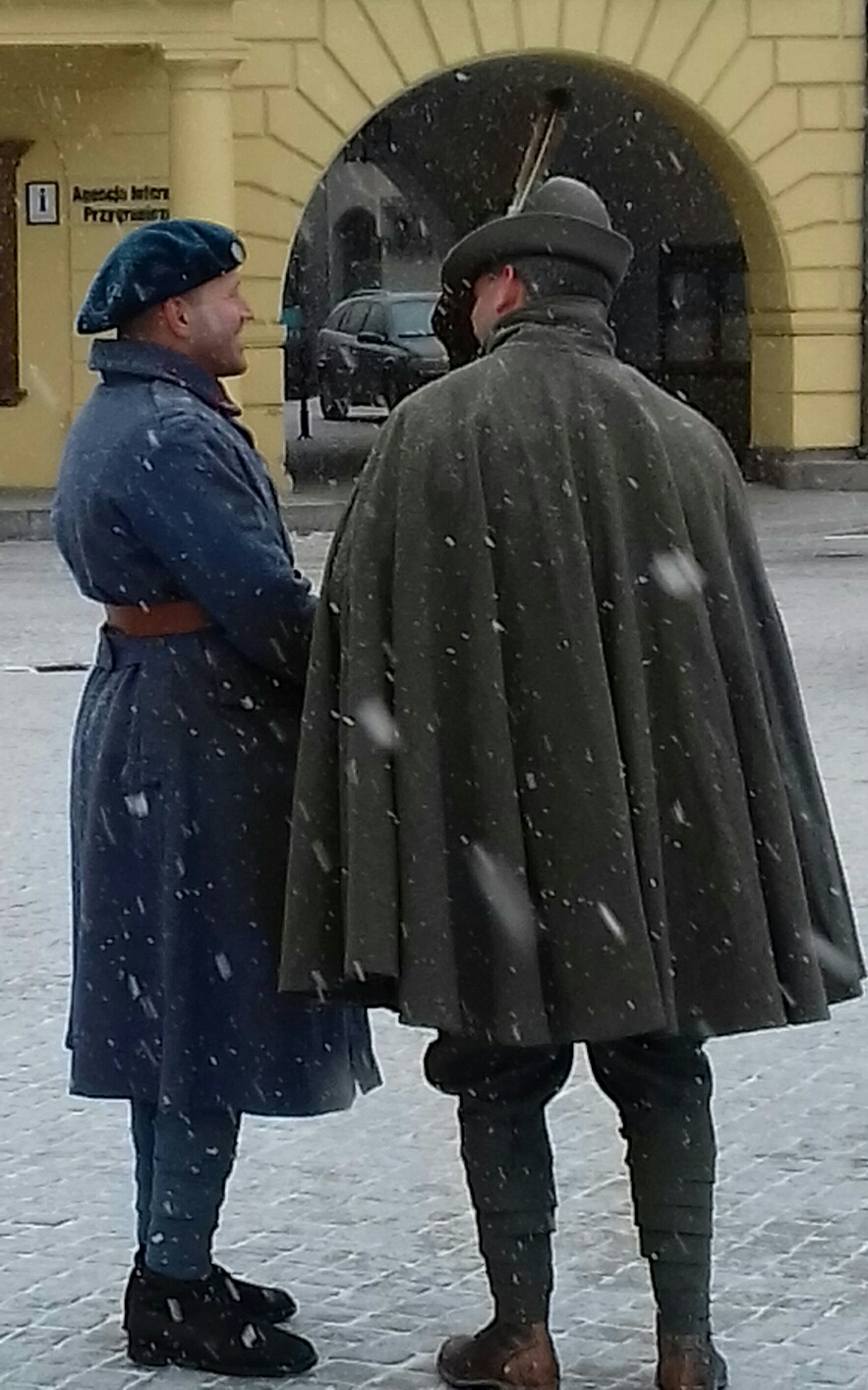 Ian and I were also impressed by the Czechs concluding their day with a double wreath laying at the graves of Polish soldiers in Skoczów.  Reflecting the human complexity of Teschen in 1919, these men had been laid to rest in adjacent Catholic and Protestant cemeteries.  And in the early evening darkness the lighting of candles next to their memorial stones added poignancy to the ceremony.

Reflecting upon the two days, I am struck by the willingness of my Czech colleagues to engage with what might termed the ‘difficult history’ of the Seven Days’ War.  It would have been all too easy to let the centenary pass by without historical engagement.

It was a privilege to witness events over the two days.  I am therefore most grateful to have been able to participate as a representative of the Everyday Lives in War First World War engagement centre.