Sutton Bridge, in south Lincolnshire was the site of a now forgotten First World War prisoner of war labour camp under the administration of Brocton POW camp, outside Birmingham. Records show that each working camp was affiliated to a parent camp, the latter acting as the channel for identification and supervision of the camps attached to it. The exact location of the Sutton Bridge camp has been lost, though circumstantial evidence indicates that it may have been on the site of a disused docking facility in the village. Similarly, very few records exist pertaining to the life that was led there by an unknown number of German prisoners. Other than a single mention in the records of the Swiss Delegation that was sent to investigate living conditions in some camps throughout the United Kingdom, the most complete records about life in the camp exist in the photographs of A.E. Price and a number of cartoon drawings created by W. Schmid who was a prisoner held at the camp. 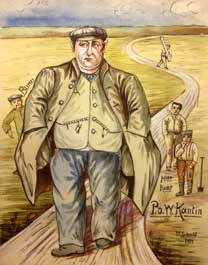 Images courtesy of the Lincolnshire Archives and the Imperial War Museum.

Perhaps the most striking of the thirty-three illustrations created by Schmid is accompanied by the text ‘Hier Komt P.O.W. Kantin’. The image is of a portly man in a flat cap walking along a road. The prisoners behind him are awestruck and remark ‘Blimey’. Visually, the importance of this figure is indicated by his massive stature, as well by the inclusion of tools such as a pick, a spade and a wheelbarrow that hang like charms from his waistcoat. The German text translates as ‘here comes’ but the title ‘Kantin’ is a playful amalgamation of English and German known as ‘Denglish’, and is used in Schmid’s cartoons in the same fashion as ‘Franglais’ was used in the BBC comedy series ‘Allo ‘Allo! In this cartoon, ‘Denglish’ is being used to lampoon the obesity of this key figure in camp life by playing upon the English word ‘canteen’ and its German equivalent ‘Kantine’. But who was he?

This character occurs in another of Schmid’s drawings, which can be looked at in the Lincolnshire County Council Archives. This time it is a pencil sketch that gives the impression of a portrait. The sketch is entitled ‘Gefangnen König’ or ‘Prisoner King’. This time the figure is wearing two badges on his lapels that are akin to medals and that bear the legends ‘1917’ and ‘1919’, the dates when the prisoners first arrived and finally left the Sutton Bridge camp. The first avenue of inquiry for the research team was, therefore, to identify this important figure. Who was this ‘Kantin’, the ‘Prisoner King’ and why was he so important to camp life? 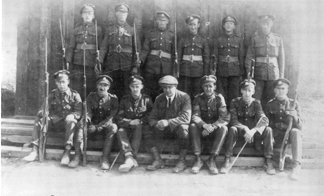 Images courtesy of the Lincolnshire Archives and the Imperial War Museum.

Our AHRC funded research project, under the auspices of the Every Day Lives at War Centenary Commemoration Centre, has several community partners, including Long Sutton and District Civic Society, so it was a local historian named Beryl Jackson who located a number of photographs of the prisoners and guards who worked at Sutton Bridge camp. These are now held at the Imperial War Museum in London. The photographs were taken or commissioned by a man named A. E. Price, the civil engineer in charge of building the sea defences that the prisoners worked on during their incarceration. It then became clear why Price was given his nickname: the canteen is where the prisoners purchased extra food with the hard earned wages they gained from their employment in land reclamation. The importance of these photographs was that the research team were now able to cross-reference Schmid’s cartoons for accuracy with an important body of primary source material. This revealed a number of factors about the cartoons that otherwise might have been missed. For example, Price, though quite large, was not an overtly obese man. This indicates that not only was Schmid prone to artistic and humorous exaggeration but also that his cartoons provided him with an avenue to be slightly rebellious in regard to figures of authority in the camp. Despite this, relations between the prisoners and Mr Price were generally congenial and this is indicated by the letters that the prisoners sent to him after their repatriation.

Mr Price (centre), photographed with a number of the Guards at Sutton Bridge camp. Part of the A.E. Price Collection held at the Imperial War Museum, London. The project team were led to this collection through the efforts of Ms Beryl Jackson, a local historian living in south Lincolnshire.

Andrew Kerr is Research Assistant and Professor Jane Chapman is a Co- Chief Investigator for the Everyday Lives at War Centenary Commemoration Centre.