When I first began working at Arnos Vale Cemetery Trust I felt that an arranging an Act of Remembrance for those who died during the two World Wars was fitting and appropriate.   The site had three war memorials and over 500 War Dead, plus the listed WW1 memorial was also a War Grave.  I wasn’t entirely sure why I felt it necessary, but it felt ‘right’.

I began by tentatively looking into what this might entail. I’d attended events as a child and had stood for the two minutes silence when teaching in a school, but to run one was a very different matter.  I was aware that visitors may well feel very deeply about such an event, to get it wrong would be both disrespectful and a potential public relations disaster.

During my investigations, I discovered that the WW1 memorial had been a site of earlier commemorations started by Robert Bush, who had run a hospital in Stoke Bishop in Bristol for ANZACS  during WW1.  This lent even more meaning to such an event. 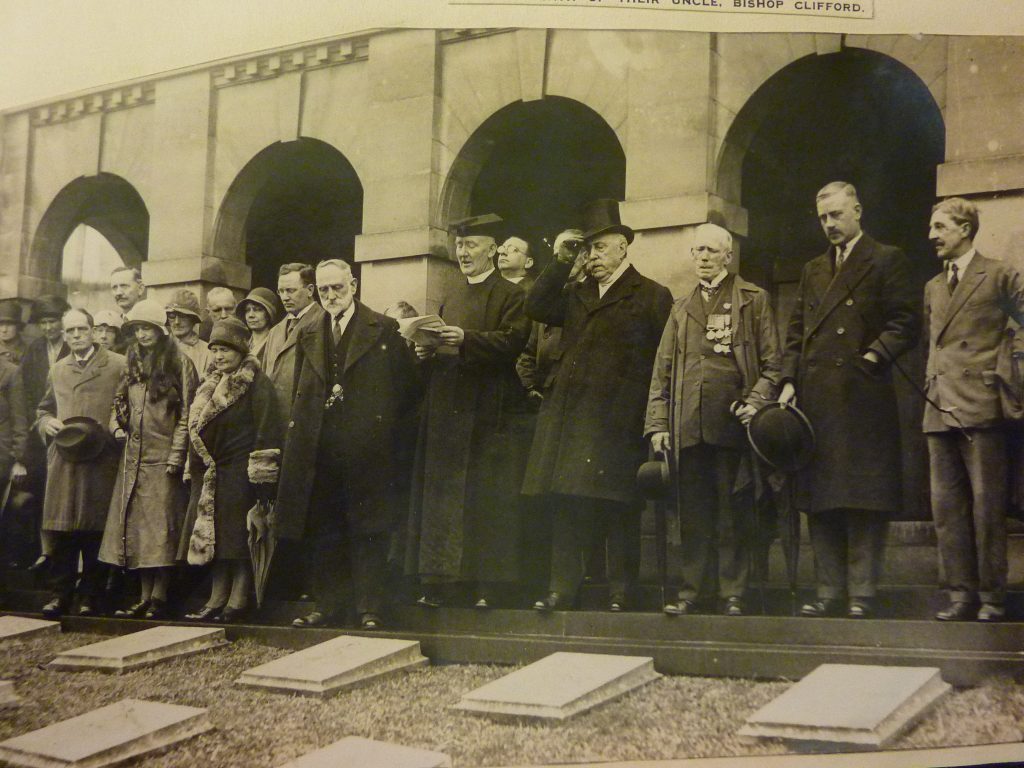 My investigations also showed there was a general templates provided by the Commonwealth War Graves Commission (CWGC) and the Royal British Legion (RBL) but nothing that specifically lent itself to my particular site, which was neither a battlefield filled with lines of identical white memorials nor just a War Memorial in a city centre.

The first year was extremely low key.  A short ceremony on Armistice Day at the WW2 memorial led by me. A local school attended and a few members of the public came along.  The RBL and CWGC also attended. Despite not being full of military ceremony like many Remembrance Day ceremonies; members of the public and the attending school both felt it was important and meaningful. A relief.

Since then the Act of Remembrance has moved location to the much grander WW1 memorial where Robert Bush held ceremonies.  The attendee numbers have swelled significantly and now a number of local schools attend. They read poems from notable authors, sing songs and have write pieces of their own for the ceremony.   The event is now led by a member of the clergy and has a more formal feel, although it is still uniquely Arnos Vale.

Have I discovered what it is for?

The Act of Remembrance has many purposes and ‘Never Forget’ is just one, but in a place of remembrance like a cemetery it seems the most pertinent.  Our little commemoration does not seek to glorify War and the people who attend always thank us for holding the ceremony.  So what is the purpose?  For Members of the public are delighted to see local children involved and engaged; they are seeing them as taking on the mantle of remembrance from the older generation.   For the children it allows them to spend time considering the real life people who fought, died and survived as they stand by the graves of those who died.  As one child told me, ‘it makes them real, not just someone you learn about’.  For the service personnel who attend, it acknowledges their sacrifices and the bravery and of those from the past.  For Arnos Vale Cemetery, it tells a story about those laid to rest, and shares the site a new audience that may never have come without the event.  This Act of Remembrance has varied purposes and roles, and that’s what makes it necessary.

Janine is the Public Engagement Manager for Arnos Vale Cemetery Trust in Bristol. She is currently undertaking a Doctorate in Heritage exploring Public Engagement in sites of memorial at the University of Hertfordshire