Guests and speakers at a recent one-day symposium held at the University of Central Lancashire and supported by the ‘Everyday Lives in War’ First World War Engagement Centre, heard from a range of experts in their field on the impact of the Easter rising on Britain. Dr. Jack Southern, Lecturer in Public History (UCLAN) has written a review of the day which you can read here. 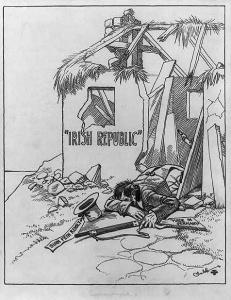 The Easter Rising was a watershed moment for both the British Empire and Ireland. In the centenary year when much attention has been focussed on the Battle of the Somme, this one day symposium at the University of Central Lancashire served as a timely reminder of the lack of attention given to the significance of the ‘rebellion’ from within Britain.

The interconnectivity of Britain and Ireland against the backdrop of the First World War raises many questions around republicanism on both sides of the Irish Sea. The success of the symposium came from the contextualisation of a range of issues, addressed through a breadth of approaches, to the involvement of the British state and the Irish diaspora in the Rising.  The first paper, from Geoffrey Sloan, explored the mechanisms of British State intelligence and reappraised how effective the institutions of information gathering were. In doing so, Sloan highlighted the ignorance towards how grave the threat of rebellion was, and the failings of policy makers to act in preventing the Rising from taking place. The paper partially exonerating the ability of the British Government to gather intelligence, whilst scrutinizing the lack of action taken in the days leading up to the Rising. Andrew Maguire then utilised a local case study as the means through which to examine local opinions to republicanism in Yorkshire. In discussing the complexity of diasporic identities, he stimulated much discussion into how British-born Irish are perceived and perceive themselves both within Ireland and within their respective host communities. Maguire also reiterated the importance of networks amongst Irish communities in Britain, and how links were maintained through successive generations of families.

The second panel featured Gerard Noonan, who having traced the birthplaces of the British-born volunteers in the Rising, discussed the event itself. Through the utilisation of digital mapping techniques, Noonan offered an illuminating and insightful synopsis of the practicalities involved in the planning and organisation of the volunteers, removed from any romanticism.

The final session focussed on veterans of the Rising and the complexities of being granted pensions by the, then, Free State government. Keiko Inoue discussed the experiences of English based participants, and Máirtín Ó Catháin, those from Scotland. Both papers explored the idea of collective memory as well as the position, in terms of identity, that British-born volunteers returned to in the aftermath of the Rising. Both papers detailed the struggles that various people had in claiming pensions from a State clearly cynical as to the motives of claimants, but more personally, the struggle for a wider acknowledgement of their role in the rebellion.

The major theme that emerged from the symposium was that of interconnectivity. Firstly this was shown through the complexity of Britain’s relationship to the Rising, contrasting the lack of assertion from the British Government with the success of the rebels. Secondly the notion of ‘Irishness’ in both countries was strongly debated both in the papers given and subsequent discussions. The role of British-born Irish volunteers both in the Rising, and in the aftermath, alongside the Irish born soldiers fighting in the British Army concurrently, further reiterated the importance of the conference in discussing the symbiotic history of both countries.

Photos from the event