When a mutual acquaintance suggested that I make contact with Sue Laidler ‘because she’s really interested in the First World War’ I had no idea what treasure lay in store. Sue comes from a family of collectors whose interest in objects from the past has been both personal and professional; the war has played a particularly significant part because both her paternal grandparents served in uniform during the conflict. Over the years, Sue has gathered together an accumulation of objects that would put many small museums to shame. The main focus of the collection is on domestic objects and affords a glimpse into perceptions of the war on the home front that are less widely understood and studied than their military counterparts.

It’s clear from the range of china in the collection that the war featured in kitchens and on meal tables as well as decorative items on the sideboards and in the display cabinets of wartime homes. A huge variety of objects were produced, decorated with appropriately patriotic illustrations and phrases, from dolls’ tea sets to dinner services. For example, a plate from early in the war carries the flags of the Triple Entente and assured its users that ‘united we stand’ and a 1914 beaker carries a similar image with the caption ‘The allied forces for freedom’s cause’. Some of the china seems to convey a mixed message as the front and back images of the mug below illustrate – a potent combination of war  – ‘Conquer or Die’ – and pastel meadow flowers. 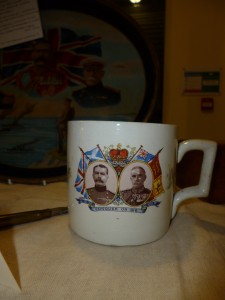 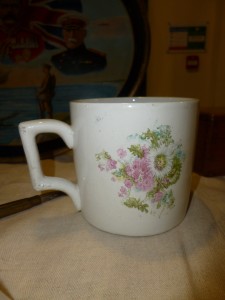 Companies such as Grimwades maximised the opportunities that the war brought, a sizeable company (c. 1,000 employees) when the war began, the production of highly popular lines such as ‘Old Bill’, ensured that profits were maintained in wartime. Bruce Bairnsfather’s character established his popularity in the Fragments from France series, but paper was not the only medium used to convey his pleasingly cynical humour, in late 1917 The Bystander, the magazine which published Bairnsfather’s work gave Grimwades permission to produce the pottery. The image below shows a range of the objects produced and a number of these are in Sue’s collection – the catalogue lists a variety of object from ash trays, to shaving mugs and rose bowls.[i]

The items could be put to good practical use, but it is likely that many were purchased as domestic souvenirs of the conflict, a way of remembering the war within a private family setting. Some items, like the butter dish, carried a message that appeared on the back of many of Grimwades’ products (see the wartime butter dish in the ‘Food’ posting on this website), which described the female workers in the factories doing their bit at home while their male counterparts served on the battle fields. The patriotic tone of the caption seems to suggest that purchasing the pottery was a direct contribution to the war effort, yet there is nothing to indicate that sales were anything but direct contributions to Grimwades’ balance sheet. The Pottery Gazette noted that items – some signed by the mayor of Stoke-on-Trent – were auctioned to raise funds for the Red Cross, but that appears to be as close as the Bairnsfather Ware came to philanthropy.[ii]

Many of the items in Sue’s collection are souvenirs sent home by soldier serving abroad.  The beautifully embroidered postcards that the men posted to mothers and sweethearts are items with which we are relatively familiar, but cushion covers depicting the burning of the Cloth Hall at Ypres in November 1914 have received less attention. The block printing and repeats of the design indicates a level of mass production, evidence that Belgian commerce had a similarly innovative response to the diverse possibilities of the war. 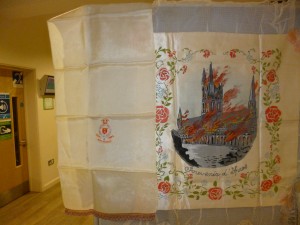 The detailed depiction of the destruction in Ypres is something that one would assume would have been a talking point in any parlour. The ‘Souvenir d’Ypres’ brought the world of the war into the home in a particularly vivid fashion, allowing those waiting for the safe return of their sons and fathers to share in some small way the life-changing events taking place on the continent. Textiles form a significant part of the collection, the silks – the postcards, hankies and covers – and also a number of crocheted items, many with a similar design of flags and a battleship, probably from a pattern that was widely published in magazines such as Woman’s Own during the war.[iii] Sewing and crochet work have taken second place to knitting in accounts of the war, historians such as Paul Ward have identified the activity as a method by which women could express their patriotism in practical terms.[iv]  Although the thousands of socks, balaclavas and mittens produced did not always meet with approval of their recipients and Captain J. Liddell complained in a letter home that some of the items were ‘thin and shoddy’.[v]

Sue’s collection is fascinating because it presents the war in a way that historians have yet to explore fully, the details of the intimate domestic space of the home in this period have not received the level of attention that has been given, for example, to trench art. A study of these everyday objects could reveal a level of participation in this first ‘total war’ through their purchase and use that has yet to be fully understood – the war came home in the letters and news from the front, but it also existed in the milk jug or the tea tray used daily. And of course these objects lived on after the war and created their own form of commemoration, an adjunct to the civic war memorials erected across the nation and the individual shrines created in many parlours with the photos, cap badges and medals of the casualties. The war lived on in the pottery and textiles too, a reminder of the momentous events that changed worlds – public and domestic. 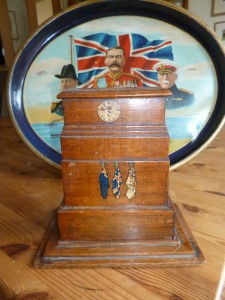 [i] Full details of Grimwades’ catalogue can be found on the Bairnsfather website at: http://www.brucebairnsfather.org.uk