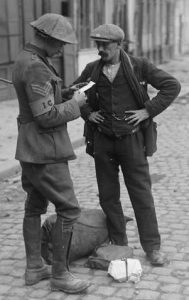 THE GERMAN SPRING OFFENSIVE, MARCH-JULY 1918 (Q 11006) Bombardment of Bethune in April 1918. Sergeant of the Intelligence Corps questioning a civilian in the deserted streets, 10 May 1918. Copyright: © IWM. Original Source: http://www.iwm.org.uk/collections/item/object/205246639

Dr Jim Beach (University of Northampton) and the Military Intelligence Museum will collaborate to investigate the Intelligence Corps during the First World War.

Intelligence Corps units were formed by the British army in different theatres of war and contained many of the officers and soldiers engaged in intelligence work.  But, as temporary organisations with secretive duties, they were deliberately omitted from public documents such as the Army Lists.

Funded jointly by the Everyday Lives in War and Hidden Histories engagement centres, the project will run throughout 2017 and will explore the recruitment, training, employment, and personnel of the corps between 1914 and 1919.

The project will engage in conventional archival research, but will also use modern genealogical tools to investigate the corps’ people.  Through family history and First World War social media sites, the project will reach out to the public for their assistance.

Jim said “It is great to be able to work with the museum on such an exciting and challenging project.  We hope to produce a fascinating case study of how Britain harnessed many eccentric individuals with uncommon skill-sets to support its war effort”.